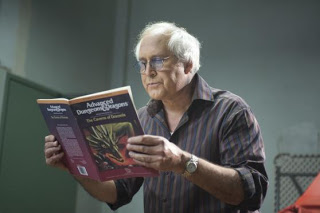 Sometimes I really hate Twitter. On the one hand, I love following professional TV critics because they Tweet about things I’m interested in and are usually pretty funny. But they also get to see episodes ahead of the rest of us, Tweet about them, and sometimes overhype an episode before it airs. And that kind of happened to me with last night’s episode of Community.

Don’t get me wrong, I thought it was good. Every episode of Community is good. But was it the best? No, I don’t think so. I loved how they managed to make a bunch of people sitting in a room with no special affects or gimmicks (save for Chang’s appearance in black makeup and a white wig) very funny. They did a great job with that. But for too much of the episode I felt like Pierce had crossed a line. The fact that he’s a jackass wasn’t funny anymore, it was just angering. I was actually hoping Jeff would pop him in the face.

That said, I still liked the episode overall and it redeemed itself in the end when everyone (including Fat Neil) turned the tables on Pierce.

The show did a great job of making Dungeons & Dragons funny, even to people like me who know nothing about it. I loved how some personalities were played up, like Britta as the advocate for fictional, mythical characters and Abed as the Dungeon Master, but others were surprising, like Annie’s hilarious prowess in describing how a man would seduce a woman…or troll, or fair maiden, or mildly attractive gnome, or whatever Abed was pretending to be at the time. Anyway, it was hilarious and probably the highlight of the entire episode for me. Especially because Troy was taking notes. (What is the appropriate amount of time to cuddle after making imaginary love in a fictional barn?) 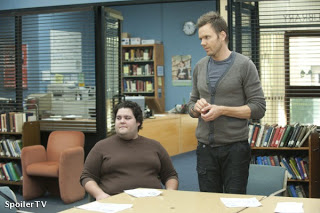 The twist that Jeff was the one who coined the name “Fat Neil” didn’t quite work for me just because I wasn’t all that surprised or disappointed. Yeah, Jeff offhandedly gave someone a cruel nickname that caught on. But Pierce was the one being a total jackass right to the guy’s face. I wasn’t mad at Jeff for even a second, but I stayed mad at Pierce. I like that Pierce is offensive, rude and selfish. I don’t like Pierce being hateful, destructive and cruel.

Had I not heard so many glorious things about this episode, I probably would have liked it better. But when I caught the first season on DVD I knew there was a legendary paintball episode coming, and that still didn’t make it any less brilliant. What did you think of “Advanced Dungeons and Dragons”? Best episode ever or somewhere in the middle? Now here are a few quotes to get you through to next week:

Community: Does D&D stand for Depression and Douchebags?
https://haligonia.ca/community-does-dad-stand-for-depression-and-douchebags-32620/