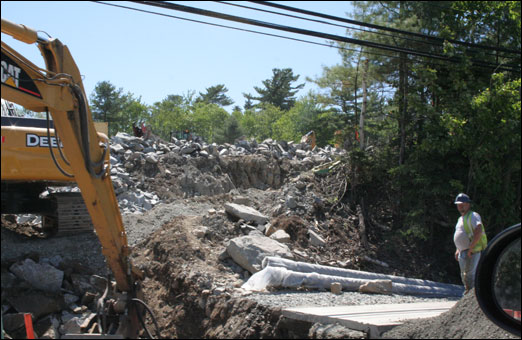 Construction of a new multi-unit condominium complex on the Bedford Highway is expected to be completed in about a year and a half.

So close, but yet so far.

The Highway is periodically being narrowed to one lane in the area as workers use heavy machinery to build a new multi-unit condominium complex on the side of the hill between Nelsons Landing Blvd. and Wyatt Rd.

According to Mark Jamieson, a staffer in HRM’s Community Development department, most of the construction that has been tying up the Bedford Highway will be done within a couple of months.

However, Jamieson says tie-ups can still be expected periodically in the future as construction proceeds. Construction of the condo complex is expected to be completed in about a year and half.

Recently, rumours have been brewing about a Starbucks coffee shop coming to Bedford.

The rumours suggest the shop would soon open in the Village Centre plaza and would be located in the unit formerly occupied by Dairy Queen, which shut down in April.

The Bedford Beacon contacted Starbucks’ Canadian head office in Toronto to follow up on the rumour.

“At the present time, there’s nothing nothing in the books for Bedford,” a spokesperson told The Beacon. “But that’s not to that it’s not a possibility. We’re always looking for new cities for store growth.”