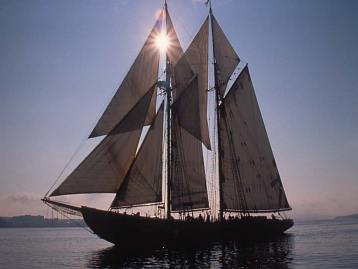 From Provincial Release:
The province awarded the Bluenose II construction contract, worth $12.5 million, to the Lunenburg Shipyard Alliance today, July 8, as part of a significant restoration project announced by the provincial and federal governments in May 2009.

The total value of the project is $14.8 million. The federal contribution towards the project will come from the Infrastructure Stimulus Fund.

"Because of the work about to take place on the Lunenburg waterfront the iconic Bluenose II will continue to showcase Nova Scotia's proud marine heritage to the world for many years to come," said Minister of Tourism, Culture and Heritage Percy Paris.

"Not only is her future secure, we will also create a legacy of good jobs that grow the economy by helping Nova Scotia firms be more competitive for future boat building projects."

"The government of Canada is committed to supporting projects like this one that will promote national pride while strengthening our country's, and our region's economic future," said Peter MacKay, Minister of National Defence. "This restoration project provides Nova Scotia with a living legacy of its history and heritage."

The restoration work will take place on the Lunenburg waterfront at Lunenburg Industrial Foundry's facilities. As part of the contract, shipbuilding infrastructure worth $1.5 million will be added to the waterfront as a lasting benefit for Lunenburg.

The alliance was the successful respondent to a request for expressions of interest issued in January, and responded to a detailed request for proposals in June that formed the basis of the final contract.

"That the co-operation of both provincial and federal governments in making this possible is to be highly commended," said Laurence Mawhinney, mayor of the town of Lunenburg. "The Bluenose II project will be a major attraction for visitors to Nova Scotia during the next two years."

Plans are proceeding to provide the public with views of the construction site through a video link at the Fisheries Museum of the Atlantic in Lunenburg. The museum's collection includes a number of artifacts and resources that tell the story of the famous schooner Bluenose whose legacy the Bluenose II helps preserve.

Construction activity will begin immediately with the Bluenose II being moved from its home berth at the museum wharf to the Lunenburg Industrial Foundry site.