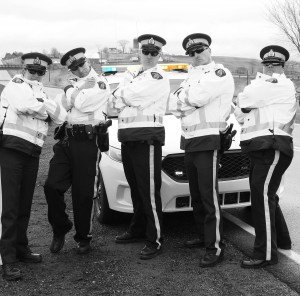 Today the Nova Scotia RCMP debuted its new music video, ‘Cop Light Bling’, to promote awareness of Nova Scotia’s ‘Move Over’ law. Below are just some of the lyrics that appear in the video:

Ever since May 2010, you…
Can be fined if you don’t move,
To the lane farthest from red and blue,
If it’s safe for you to do.

The goal of the video is to highlight Nova Scotia’s An Act to Increase Safety for First Responders and Others, commonly known as the ‘Move Over’ law.  After coming into effect on May 1, 2010, the law makes it an offence to drive faster than 60 km/h or the posted speed limit (whichever is the lesser of the two) when passing a stopped emergency vehicle with its lights flashing. Motorists also must change to the lane farthest from the stopped emergency vehicle, if that lane is free and it is safe to do so.

Although the ‘Move Over’ law has been in place for nearly six years, some motorists continue to speed past first responders who work at the roadside. This puts police officers, paramedics, firefighters and other emergency personnel in dangerous situations that could result in serious injuries or worse.

“We’re always evolving in how we connect with our communities, and this music video is another unique way of getting our message to citizens,” said Cst. Jennifer Clarke, who appears in the video. “We also want drivers to know that when they slow down and move over while passing a stopped emergency vehicle, they’re doing their part in keeping first responders safe.”

The soon-to-be chart-topping single can be viewed on YouTube at: https://www.youtube.com/watch?v=X9IYyIrGcv0

Nova Scotia RCMP will continue to share information about ‘Move Over’ legislation on social media throughout the month of April. Citizens can follow the campaign on Twitter (@RCMPNS) and Facebook (Royal Canadian Mounted Police in Nova Scotia), and through the hashtags #SlowDown and #MoveOver. 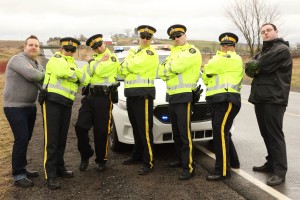