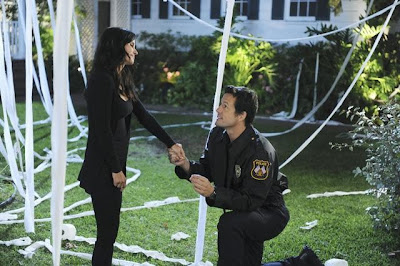 Despite news of dismal ratings, I’m thrilled that Cougar Town is finally back in my life. I love this wacky little sitcom!

The showrunners have tossed around the idea of changing the show’s name to fight misconceptions (I think they should) but, for whatever reasons, did not. They also released a long, spoiler-filled promo for the season, hoping that seeing so much of what the show is like would inspire people to watch it. It’s a hard thing to get people to tune in to your low-rated comedy, even when it’s critically beloved (Hi, Community – miss you!) and it’s even harder to do so when a lot of people mistakenly think the show is about Courtney Cox sleeping with younger dudes. The show that debuted with the title “Cougar Town” is not the show they’re making now, it’s not the show they’ve been making for a long time. But it’s hard to get people on board with that.

The season three premiere focused on Jules trying to prove she’s not predictable, and ended with Grayson proposing. Awwww! Had I not watched the spoiler reel, I would not have seen this moment coming. Even though I did, I still really enjoyed it.

The episode was also filled with plenty of fun, like a running joke about who should really be “the gang” (it eventually dwindled to just Ellie and her wine) to a bunch of gags involved a homemade green screen in Travis’s new apartment. (A two bedroom shared by nine college dudes and a horse-dog. Must smell great.) There was also a pretty funny development regarding Ellie and Andy’s son, who is now quite the handful. Um, did they think they could spend 90% of their time drinking wine at the neighbor’s house and not end up with a devil-toddler?

So who watched the season premiere? Did you like it? Are you excited that we’re at least getting a third season?