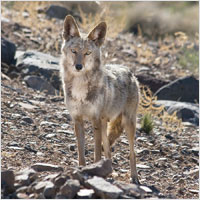 Coyotes have been sited in different neighbourhoods in Bedford.

Coyotes have been spotted in neighbourhoods throughout Bedford.

In mid-January students at Eaglewood Drive School were sent home with a newsletter telling parents to take precautions as coyotes had been spotted on the school property.

Also, coyotes have been spotted in the neighbourhoods surrounding Bedford South School.

Due to the large numbers of trees and habitats being destroyed in the area, this is not surprising.

As a result of these sitings the Bedford Beacon decided to look up some facts on coyotes in Nova Scotia.

The Government of Nova Scotia website explains that coyotes found in Nova Scotia are known as Eastern Coyotes. They are larger than the Western Coyotes because of interbreeding with wolves.

“Some individuals encountered here may be as much as twice the average size of coyotes found in southwestern North America.”

The coyotes spread from west to east through Ontario, Quebec, New York and New Brunswick.

“Coyotes are wild and generally avoid people. However, they should be treated as potentially dangerous. Do not approach a coyote.”

How can people reduce coyote interactions?

“Make sure garbage is not left laying around, remove pet food, compost, or garbage from outside your doorstep at night. Do not feed wild animals. Do not leave pets unattended or unprotected outdoors.”

A coyote’s diet consists of an assortment of different foods: deer, mice, squirrels, snowshoe hare, and fruit (like apples, blueberries, blackberries, and raspberries).

“Snow and the lack of leaf cover makes coyotes more visible. Heavy snow may encourage travel on or near roads. Recently publicity about coyotes has also heightened public awareness and the likelihood to report sightings.”