I love historical fiction, and I love Canadian authors; these are ten of my favourite historical novels written by Canadians. 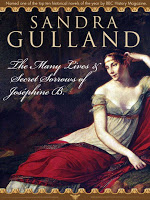 The Many Lives and Secret Sorrows of Josephine B.   by Sandra Gulland
This is the first in a trilogy of fictional diaries written in the voice of Josephine Bonaparte. This first book is especially fascinating as it covers her life in Martinique as a child, and her marriage to the aristocratic revolutionary Alexandre de Beauharnais. Seeing the French revolution from the perspective of the aristocracy is really different

The Orenda  by Joseph Boyden
The Orenda won CBC’s 2014 Canada Reads competition, and rightly so. Told in three different voices, the Orenda is a compassionate, honest, and devastating account of the the relations among the Huron, Iroquois, and French Jesuits more or less following the events at Sainte Marie among the Hurons in 1648.

The Book of Negroes by Lawrence Hill
Follows the sometimes harrowing story of Aminata, a young woman who is abducted from her home in Niger and sold into slavery in 18th century America. Meticulously researched and well written, this book was recently adapted as a miniseries on CBC and BET.

Clara Callan by Richard B. Wright
Letters and journal entries tell the story of two sisters and the challenges of life in 1930s Ontario and New York city. Won the Giller prize for 2001.

Alias Grace by Margaret Atwood
Atwood takes on the real life story of Grace Marks who was convicted for the murder of her employer and his housekeeper in 1843. Shifting points of view leave readers to draw their own conclusions as to what really happened.

In the Skin of a Lion by Michael Ondaatje
Ondaatje uses his poetic style to document the contributions of immigrants in early twentieth century Toronto during the construction of the Bloor Viaduct.

The Golden Mean by Annabel Lyon
For a novel about a philosopher this book is very accessible and rooted in the physical world. Aristotle tutors young Alexander the great and struggles to help him find a path between the extremes of abstract thought and physical violence.

Away by Jane Urquhart
Lyrical, magical, and romantic, Away traces the history of a 19th century Canadian family with roots in Ireland.