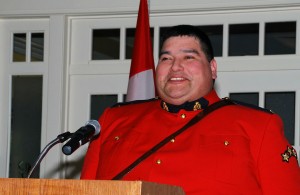 Nova Scotia RCMP member, Cst. Duma Bernard of Eskasoni First Nation, was awarded the 2016 Imperial Order of the Daughters of the Empire (IODE) RCMP Police Community Service Award at a ceremony in Toronto two weeks ago.

As a national women’s charitable organization, the IODE annually honours an RCMP member, unit or detachment for exemplary public service to the community outside of regular duties.

“Cst. Bernard is an outstanding person who works tirelessly to make a difference in his community,” said Nova Scotia RCMP Commanding Officer, A/Commr. Brian Brennan. “His dedication to his community and its youth is a strong example of excellence in performance.”

Cst. Bernard works with students every day as a school resource officer but his dedication to youth extends beyond the classroom. Outside of work, Cst. Bernard coordinates a youth volunteer group that organizes initiatives and events for Eskasoni First Nation residents. From shoveling snow to serving community dinners, the group keeps busy and active.

Cst. Bernard received his award surrounded by family members who drove over 18 hours to Toronto from Cape Breton, Nova Scotia. In his award ceremony speech, Cst. Bernard recognized the youth he volunteers with as well as his coworkers and the many Eskasoni-based organizations supporting youth.

In his 20-year policing career, Cst. Bernard has worked across the province. He’s spent the last 13 years with the RCMP posted at Eskasoni First Nation, where he grew up.     . Source: Media Release