Via Twitter we heard from one reader who had high praise for the latest from Canadian literary great Margaret Atwood: “I’ve read a few 2013 books – all great! My favourite so far would have to be @MargaretAtwood’s Maddaddam! Brilliant!” Maddaddam is the final book in the trilogy of dystopian novels that began with Oryx and Crake. The second novel in the series The Year of the Flood is a current contender for the 2013 Canada Reads title: I guess it’s time to read all three! (M)

Also via Twitter we had a vote for the George Saunders short story collection The Tenth of December (M). That poster called their pick a “predictable choice”, I’m guessing because it’s a book that has showed up on a number of year end best of lists. In fact this one is such a clear winner that back on January 3, The New York Times proclaimed that “George Saunders Has Written the Best Book You’ll Read This Year”. High praise from readers and critics: add this one to your list if you haven’t already gotten to it.

If your reading interests tend more toward non-fiction than fiction, you might want to check out Lost Girls: an unsolved American mystery (M) by Robert Kolker, which was also suggested by one of our Twitter followers. “A haunting and humanizing account of the true-life search for a serial killer still at large on Long Island, in a compelling tale of unsolved murder and Internet prostitution. “Like many of the books suggested by our readers, this book has been included in a number of 2013 notable book lists, including The Globe and Mail‘s and the New York Times‘.

We got a shout out for some humour over on our Facebook page and a reader who posted the following about their favourite book of 2013: “Let’s Explore Diabetes with Owls (M) by David Sedaris. He turns the everyday, perceived to be mundane, thoughts we all have and makes brilliant essays/short stories out of them. This collection is one of his best. Also, since it’s close to the holidays I would highly recommend “Holidays on Ice” by David Sedaris (1997). It will get you in to the the weirdest kind of Christmas spirit!”

Twitter was a source for a couple of local picks as well — one for reading and one for savouring (or maybe both for each of them!).

Fallsy Downsies (M), the newest novel by local author Stephanie Domet,  is the story of an ageing musician on his last tour across Canada. He’s trying to right his wrongs and make sense of this thing called fame. 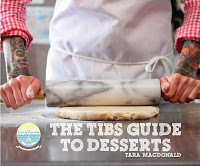 The TIBS Guide to Desserts (M), by Tara MacDonald is a new local cookbook from the folks behind the Two if By Sea cafes in Dartmouth and Halifax. Cookbooks are all the rage these days and they aren’t just for budding chefs, they make great reading too.

Thanks to all the readers who participated. If you have a favourite you want to add, please do so in the comments below!