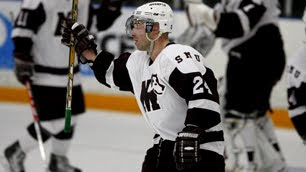 Admittedly I was not able to go to the Mike Danton Show (SMU vs Acadia) at the Halifax Forum Wednesday night. I was sitting behind the board down the street for the Halifax Mooseheads road game.

But I was monitoring the game’s live stats, and from all accounts from friends and the numerous tweets from inside the Forum, Danton had a good game.

He showed some rust, but played physical, skated hard and registered three shots on net. And by the third period, with his team down 3-0 he scored SMU’s only goal and seemed to provide a spark for his teammates.

He said he wasn’t nervous before the game, but he was a bit anxious.

“Scoring the goal was a huge monkey off my back,” Danton said after the game.

“You guys have put me on the front page for the past two weeks, so it was good to get that one away.”

I will say I had concerns about Mike Danton’s return to Halifax. Mostly because I wondered if we were going to get the same little shift disturber we saw in the 2000 Memorial Cup.

But after all the speculation by just about every person in Halifax, Danton spoke to the media last week — and to me (and my colleagues) he seemed sincere.

That was my concern — is this guy still a jerk? Will his attitude negatively affect the dressing room? Is he still a loose cannon? That question was answered, I believe. Danton seems cool, collected, grown up, and he even apologized for his childish antics at the 2000 Memorial Cup. Great, game on.

What I am surprised about, is the other reasons people didn’t think he should be playing university hockey. People seemed uneducated about the situation and formed an opinion anyways.

Mike Danton is too old.

In all seriousness I heard this over and over as an argument as to why Mike Danton shouldn’t be lacing them up in the AUS.

That is a list of the ages of Saint Mary’s University hockey players. Average age: 26.72

It’s hard to argue Danton is a grandpa on the team.

It’s especially hard to argue this, when you consider that people go back to university at all ages. If you’ve got some or all of your five years of university sport eligibility left, you can play sports. It’s about ability not age, which is demonstrated by Patti Blanchard.

Forty-eight-year-old Patty Blanchard of Moncton, finished 11th in Cross Country and earned second-team all-Canadian status in 2005. That’s despite running against kids who were 25 years younger. Blanchard was a bronze medallist at the first-ever CIS women’s cross country championship in 1980.

He’s got a criminal record.

And? Criminal records do not prohibit you from going to university. In fact, I think that’s called discrimination. We have that Charter thingy that protects people from discrimination.

How are people with criminal records supposed to reform themselves if we don’t let them have the chance to do so. If they screw up their chances so be it. But let’s let the ones who want to put their lives back on track – do it.

I’ve heard people say things like “I don’t want a convicted criminal wandering around the same campus as my daughter” … and yet your daughter probably goes out downtown and stumbles home drunk at 4 in the morning. That’s safe, eh?

SMU coach Trevor Steinburg is the son of a Canadian parole officer. He knows all about second chances. But he also knows tough love. He’s said this is Danton’s second chance, but also his last. The great part about Steinburg, is he’s taken Danton into his home. I wouldn’t expect too many shenanigans from Danton living in the Steinburg household.

I really think people have this view of a bunch of kids, straight out of high school playing hockey for their university. Like you see in other sports like soccer and basketball.

As I’ve pointed out with the average age of the SMU hockey team, that is just not the case. SMU isn’t an anomaly.

This is not the NCAA. Canadian university just works this way. Players go to university hockey after Major Junior. Most players play Major Junior until they’re 19 or 20. If they don’t make “The Show” then they head to university. Major Junior requires its players to be in school while playing so the transition is usually natural.

And in fact, there have been cases of players going pro after some time in the university stage (see: Jody Shelley). There are cases where players have had chances at the professional level and didn’t quite cut it, so they come back to university. (see: Dominic Noel).

And for good measure, let’s go back to the example of Patti Blanchard from above. Blanchard was on Canada’s national cross country team before returning to university.

I have one final point that I want to make: Mike Danton is enrolled in university classes. He’s bettering his life. He wants a degree. He isn’t allowed to travel to the U.S. so therefore, him using the AUS as a stepping stone back into pro hockey is not a realistic assumption.

Danton shows rust in SMU debut, but is the team's only spark
https://haligonia.ca/danton-shows-rust-in-smu-debut-but-is-the-teams-only-spark-17667/