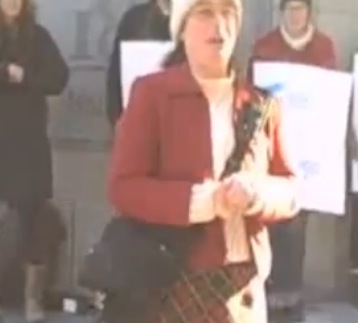 HALIFAX- It was a strange spectacle for commuters on their way to work in downtown Halifax on Monday. But the fourteen-foot oil barrel on the corner of Duke and Hollis St. was no joke.

Members of the Ecology Action Centre and Sierra Club brought the giant home-made barrel to Hollis St. at about 11 am Monday morning.

The barrel was part of a demonstration urging further political action on climate change. “Canada does not have a climate plan and our federal government is more concerned about protecting the pollution from the oil industry than our climate,” said Cheryl Ratchford, the EAC’s Energy coordinator in a Monday press release.

The  demonstrators, numbering around a dozen set-up shop outside of the 1801 Hollis St. building, which houses the office of Defence Minister Peter MacKay.

They put on a skit in which they freed “Canadian Prime Minister Stephen Harper” from the inside of the giant oil barrel, showing him the world outside of concerns for just the oil industry. They were on hand to speak to the media and even delivered a letter to the defence minister’s offices.

The EAC’s Policy Director Mark Butler believes that Nova Scotia-centric industries are being harmed by the lack of attention being paid to climate change. “Our oil exports…drives up the canadian dollar which then makes our exports more expensive so that the fishing industry other export oriented industries are now suffering because of the high dollar.”