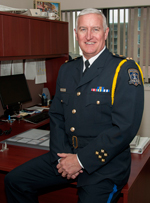 Deputy Moore has been a police officer for more than 30 year­s, proudly serving our community, first with the Dartmouth Police Department and then HRP. During his career, he has held a wide variety of operational and admi­nistrative positions and has been an int­egral member of the management team since 2008.

“I extend my sincere thanks to Bill for all he has done for policing in our com­munity during his ca­reer. Bill will be missed for his contri­butions to HRP, as well as his strategic outlook, dedication to duty and sense of humour. I am confi­dent that, in his new role, he’ll contin­ue to contribute to policing at the loca­l, provincial, natio­nal and international levels for years to come,” says Chief Jean Michel Blais.

Please join us in wi­shing Deputy Moore all the best in his new position with CAC­P.