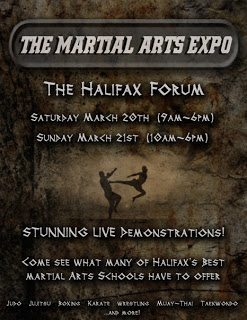 When going around the Halifax area it is hard to find the right gym for yourself if you want to train in martial arts. Well if your having that trouble one place will be able to help you out. The Halifax Martial Arts Expo will be taking place March 20-21st at the Halifax Forum. The event idea came from an unlikely source.

“I train in Kenpo Karate and I have for a couple of years. Since I own a promotions company, my trainer came to me and said I want to get some advice on what I should do to market to get more members to the school,” says Ryan Staples, The Expo organizer.

“I thought about and I said I have done radio advertising, I have done newspaper and I have done this and that and everything is really expensive and you don’t know if your going to hit your target market. I thought about and said how did I sign up. It was because he let me come in. It was through word of mouth on how I found out about them. I came in checked it out and I was blown away with what I saw. I thought can he do this in front of a lot of people. It clicked right there and you know this is what a lot of martial arts schools could do because it is so hard to find them.”

The event will feature gyms from the Halifax area and other parts of Nova Scotia and New Brunswick as well. Some of the gyms that have signed up are Bushido Kai, Kenpo Karate, Clinch Martial Arts just to name a few. Viewers will able to watch demonstrations put on by these gyms from everything like Maui Thai, to Karate, to wrestling. While some gyms may usually be quiet and don’t want a lot people in, the community has seem to embrace this.

“I have gotten a lot of great support,” says Staples.

“I have a good number of schools coming now. I was hope to get absolute every school involved in this is what I am getting at. We have gotten a pretty good response from it. We have even gotten gyms, fitness facilitates etc that are pretty on board with the idea of it and getting involved. Organization, I have been planning this for close to a year now so most of it was pretty much down. It was just kind of executing everything and contacting these schools. I think the toughest part was to even find where these schools are at and get actual contacts.”

While this may be new to people in the Halifax area, this type of conventions has seen a fair bit of success in other cities with the Mixed Martial Arts expo that have taken place in Toronto and other major cities. The idea is different with Staples. The motto for this expo is where traditional meets modern and where all gyms will get a chance to showcase there skills. Cost will be $5 at the Multi Purpose Centre with the doors open from 9-6 on Saturday and 10-6 on Sunday. For more information you check out there facebook page by typing in Halifax Martial Arts Expo.

Derek Leblanc is a freelance Sports journalist living in Halifax.

Derek Leblanc On the Martial Arts Expo in Halifax
https://haligonia.ca/derek-leblanc-on-the-martial-arts-expo-in-halifax-13205/