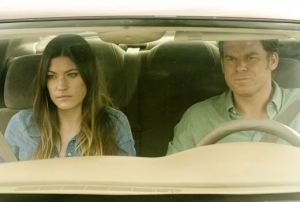 I have a few thoughts on last night’s pretty thrilling episode of Dexter, so click through if you’ve seen it.

This final season is all about Deb and Dexter, and in last night’s episode Deb finally hit rock bottom.

I still don’t know what to make of Dr. Vogel. She’s too obviously villainous, and it’s beginning to feel inevitable that she’ll be somehow connected to the Brain Surgeon. Still, I thought it was interesting to watch her interact with Deborah. She kept trying to persuade Deb that Deb had made the right decision in killing LaGuerta instead of Dexter. It’s just so far from what Deb’s own moral compass is telling her.

If Deb had gotten to a place where she no longer felt guilty about committing murder, I wouldn’t have bought it. Instead, the story turned in a more fascinating direction. Deb saw Harry’s last video interview with Vogel, right after Harry saw Dexter after he’d made his first kill. Deb realized that her dad had killed himself, and she knew she couldn’t live with the truth about Dexter either.

I liked how totally wrong Dexter was about Deb when he saw her in the parking lot. He thought she’d come around. He thinks their relationship is special, and that Vogel was wrong when she said Deb may never want Dexter back in her life. Deb wasn’t ready to forgive Dexter, or forgive herself. She was ready to end things for both of them.

Deb jerking the steering wheel and forcing her and Dexter to drive into a lake would have been a decent end to the series, I think. But we’re only a few episodes in, so Deb was rescued by a nearby fisherman and then, at the last moment, she jumped back in to save Dexter.

It was a tremendous end to the episode, and I can’t wait to find out where the season goes from here. Will Deb just accept her brother now that she gave up the chance to let him die? Will she try to kill herself again? How angry will Dexter be? I like that this big a twist has come so early in the season.