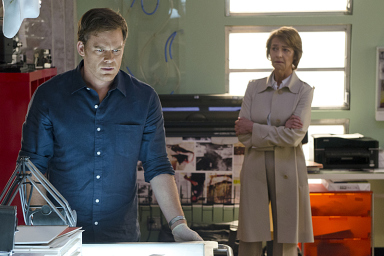 Dexter is rapidly coming to a close, but I wish I could say I were enjoying it more. I’ve had some minor complaints throughout the season, but I actually think overall the final season started off stronger than it started.

Without getting into spoiler territory before the break, I think she show has become too splintered and unfocused at the worst possible time. Too many characters are around, and there are too many things happening that are only vaguely connected. I wish this season had just focused more on Dexter and Deborah’s relationship, without bringing so many outside factors into the cold.

Now, if you’ve seen “Make Your Own Kind of Music”, click through.

Dexter’s plan is to run away with Hannah and Harrison to live out their twisted days in Argentina. Will the show give him a happy ending? I don’t think so – I think it would feel a bit unsatisfying, for Dexter to just peace out after all that’s happened. I think the end of this story has to be about Deb and Dexter. If it’s “Dexter and Hannah live happily ever after”, well, I think that’s weak.

I don’t think the chemistry between Dexter and Hannah is strong enough to sell this storyline. We haven’t spent enough time with Hannah as Dexter’s girlfriend to really want them to succeed as a couple. I feel pretty indifferent about her.

Overall, I think there has been too much going on this season. We have Jamie and Quinn, and then Quinn’s relationship with Deb, and her relationship with her boss. Then Jamie’s BFF gets killed, conveniently, but Vogel’s son? With three episodes left in the season, we are finding out that Vogel has a psychopathic son.

I don’t know about you guys, but I just don’t care about Vogel’s son. For so long, it seemed like Vogel was the brain surgeon. And yes, that would have been too easy. But a long lost serial killer son that she’s welcoming back with open arms? Please.

Speaking of sons, are we being prepped to believe that Harrison will be a serial killer? When Dexter was plotting to kill Vogel’s son, twice he was asked to think of Harrison. I thought there had to be a reason that Harrison was aged for this season, turned into a kid that talks and finds bloodied stuffed animals and draws pictures of criminal mommies. I wonder what will happen here.

I’m still interested in Deb’s journey, and I hope that she is returning to the police force. Quinn has been digging into Callie’s murder, and now that Zach is missing he’ll become even more suspicious. This has to lead him, somehow, to Dexter. And Deb has to be his partner when it happens. It’s the only thing that could save the show for me, really. I’m just so over the rest of this nonsense.

OK, clearly I am suffering from Dexter fatigue and just want the show to end. What do you guys think? Are you happy with how the final season has been so far?