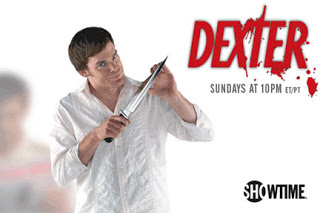 The thing about watching Dexter the day after it airs (I have to download it the morning after it airs) is that if an episode is good, you hear about it. Luckily, this week’s episode completely lived up to the hype. It was freakin’ fantastic.
So many great plot developments! I know there are some people who haven’t been fans of the Lumen plot – personally, I’ve always loved it – I don’t see how you couldn’t have changed your mind after this episode. Lumen is not Miguel Prado. The potential for this relationship is fascinating.
This episode highlighted the two major storylines this season – Dexter’s personal life, with both Harrison and Lumen, and the workings of the homicide department. The homicide department is still dealing with the Santa Muerta Case, but now they’re working on the case of Lumen’s attackers as well. I love how Dexter always ties together.
Muerta and LaGuerta
We’ll start with the Santa Muerta case. LaGuerta had one more shot to crack the case, and her ass was on the line if she didn’t. It all came down to one night in the club where the Fuentes brothers would be. Quinn and Officer Manzon would be inside, Deb and Batista would be in the surveillance van, and LaGuerta would be overseeing the operation. Things went awry immediately, though. The informant went in the club and spotted the brothers already inside, when the police had been intending to grab them at the door. She went and sat with them in the VIP section and was supposed to lure them outside, but one of them had his eye on Officcer Manzon and called her over. Deb thought it was a bad idea, but LaGuerta said Manzon should go so she could get the brothers outside. Once there, the brother stuck his hand up Manzon’s dress and discovered her gun and all hell broke loose.
The informant was shot. I was shocked Officer Manzon wasn’t shot. The most intense scene came when Deb was caught in a repeat of her previous experience when one brother slit a kid’s throat. He grabbed a woman and held a gun to her head. This time Deb shot him in the head.
This whole storyline could have some very interesting repercussions. People were injured in the shooting and LaGuerta’s job will be on the line – and she was furious when Batista suggested maybe she’d made a poor judgment call. Plus, how will having shot and killed someone affect Deb?
Boyd and Boys
Meanwhile, the homicide department has a new case on their hands – Lumen’s attackers. At the beginning of the episode, we saw a guy and his gang remove all the barrels (with dead girls in them) from the swamp and load them into a pick-up truck. He drove off and moments later was hit by a drunk driver, leaving bodies scattered all over the street.
The guy, who ran from the scene, was known by Lumen. She’d described him to Dexter because he always folded his suit jacket, and she’d seen his face since he took her blindfold off. Another guy always held his watch up to her ear, whispering “tick tick tick…that’s the sound of your life running out.” Suit guy was the one driving the car, and the car was owned by none other than Jordan Chase, the “Take It Now” guy from Boyd’s inspirational CD’s.
Chase and his bodyguard, Cole, showed up at the station with a story of how the truck had been stolen from them. Luckily, Chase was also Vince Masuka’s personal hero (of course) and that gave Dexter a great reason to snap pics of the men. Lumen ID’d Cole as the suit guy. With Cole’s prints and hair all over the truck, he also became the main focus of homicide’s investigation.
There was one problem, though – Lumen wanted to kill these men herself. She’s just like Dexter, these men are her versions of Trinity. Dexter encouraged her to let justice take care of it, but he understood her need to finish it herself. So he agreed to keep helping her, and that started with derailing the investigation. And that meant giving them Boyd.
Lumen, Dexter and Family
Dexter planted Boyd’s wallet in the truck, and along with a story from Cole about how Boyd was a known stalker who they’d considered a non-threat, he became the main focus of homicide’s investigation. But now Chase and Cole know someone planted Boyd’s wallet. Who?
Dexter and Lumen went to Cole’s apartment to check it out, with Lumen staying in the car. Dexter discovered an old photo of young boys including Cole, Boyd and the dentist Lumen had already killed. There was one other guy with him. As Dexter took it, a guy appeared out of nowhere and started choking him. Was it Cole? We’ll find out soon, I guess. Miraculously, Lumen saw a shadow from the car and had a feeling that something was going on, and she crashed into the house to save Dexter. 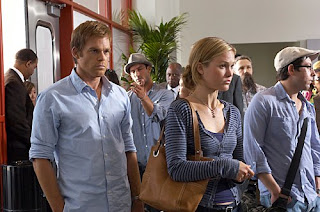 Now they’re a “we”. Not only did Dexter ask Lumen “what do we do next?”, but he brought over Harrison to visit her. She’d been staying in his old house all along, but with that she officially became part of his life.
There was one guy in the photo that Lumen and Dexter couldn’t ID, so he’ll be added to the list along with Chase and Cole – who now must know someone is on to them. I can’t wait to see where this season will go from here.
In other, minor storylines, Deb and Quinn’s relationship is moving along quite fast. Quinn’s talking about them moving in together, but Deb won’t discuss anything while at work. Do you like this relationship? Dexter had a small problem with the nanny – she prays to St. Brigid to watch over Harrison, and put a statue of the saint above his crib. Dexter was against it at first, but he came around. It was a very sweet moment when he recited the prayer for Harrison himself.
What did you think of the episode? Has it turned all the season five skeptics into believers? Will Quinn’s investigator turn up anything of consequence on Lumen? Will LaGuerta get fired or demoted? Will Lumen and Dexter bond over killing, or will their relationship go south like all of Dexter’s other relationships?