Ah the Diagram Prize! My favourite book prize of them all. The Diagram Prize is awarded to the book with the oddest title published during the year. Normally the books are so specialized and esoteric that we don’t find them in out collection, however this year we have three.
How Tea Cosies Changed the World (M)
by Loani Prior 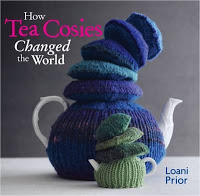 “Be drawn into a world of creative passion with “How Tea Cosies Changed the World” – Loani Prior’s fantastic follow-up to “Really Wild Tea Cosies”. Loani’s outrageous imagination has produced 24 vibrant new designs that transform the conventional tea cosy into a knitted piece of art.” publisher
How to Sharpen Pencils: a pracical and theoretical treatise on the artisanal craft of pencil sharpening for writers, artists, contractors, flange turners, anglesmiths and civil servants, with illustrations showing current practice (M)
by David Rees

“Deep in New York’s Hudson River Valley, craftsman David Rees – the world’s number one #2 pencil sharpener – still practices the age-old art of manual pencil sharpening. In 2010, he began offering his artisanal service to the world, to the jubilation of artists, writers, draftsmen, and standardized test takers. Now, in a book that is both a manifesto and a fully-illustrated walk-through of the many, many, many ways to sharpen a pencil, he reveals the secrets of his craft. By the time you’re through this book, you will know how to get the perfect point on your pencil without injuring yourself.”–Provided by publisher.
God’s Doodle: the life and times of the penis (M)
by Tom Hickman

“The story of the penis — a brilliant history of the male member that tells you EVERYTHING you wanted to know but were too shy to ask. Throughout history man has revered his penis as his ‘most precious ornament’. Yet, ambivalently, his penis has always been the source of man’s deepest neuroses too. Do women find it, in the erect state, inherently ridiculous? Why can’t a man be certain his penis will stand and deliver when he commands? If and when it steadfastly refuses, what can he do to remedy the situation? And then, of course, there’s the matter of size…   ” publisher
Also nominated but not owned by the Library:
Was Hitler Ill?:a final diagnosis
by Henrik Eberle

Four months after the end of the war, Hitler’s personal physician Theo Morell stated to his fellow prisoner Karl Brandt: “In fact, Hitler was never sick.” Brandt, who had been responsible for the “euthanasia” killings and was thus deeply implicated in the crimes of the Nazi regime, disagreed. He claimed that Morell had “pumped the Führer full of drugs” and was now merely attempting to justify his actions. In his opinion, Morell had turned Hitler into a physical wreck. The image of a decrepit and drug-dependent psychopath in the Reich Chancellery bunker is one of the most enduring myths about Hitler. It provides a simple explanation for his actions: who but a sick man could have ordered the killing of millions of people? Hans-Joachim Neumann and Henrik Eberle study this question and seek answers in the detailed notes and diaries left by Morell, in medical reports, pharmacological analyses and interviews with eye witnesses. Their conclusions are clear and definitive.” publisher
Goblinproofing One’s Chicken Coop
by Reginald Bakeley

“Plagued by pixies, goaded by goblins, or bothered by brownies? Help is on the way! In the tradition of Lemony Snicket and Roald Dahl, Goblinproofing One’s Chicken Coop shows how to banish those pesky dark Fairy creatures who are ready to thwart every last pleasure, be it gardening, country hikes, or even getting a good night’s sleep. In this charming guide, “fairy hunter” Reginald Bakeley offers practical instructions to clear your home and garden of these unsettling inhabitants, and banish them from you’re your chicken coop and kitchen cupboard forever!” publisher
Lofts of North America: pigeon lofts

by Jerry Gagne
I don’t know too much about this one, but Jerry has a website with all you need to know about the care and maintenance of pigeons http://www.foyspigeonsupplies.com/jerrydesk.html