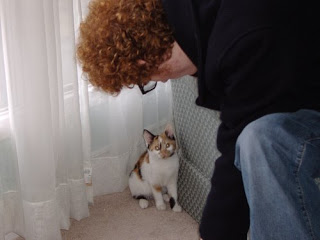 I have long suspected that my cat hated my laptop… probably because I pay attention to it when I should be showering her with attention/treats (mostly treats). This laptop has been scratched, slept on, clogged with fur, and generally abused by my cat for many months. I had my suspicions, but I didn’t know how far she’d go.

Last Friday must’ve been her last stand against technology, as when my boyfriend stopped by my place to check the internets, he discovered that the laptop’s screen was, basically, cracked in two. The culprits? Likely a combination of cat and gravity.

This is pretty much what my screen looks like now: 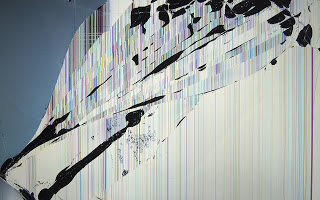 I can see things on one corner of the screen, and at a moment of desperation managed to check my email/Twitter on a teeny-tiny Firefox and squint at mini-Facebook, but it’s really not worth it. El laptoppo is dead, RIP.

Not having the internet to contain my attention led to some good things and some bad things.

Good: I made it out to the K-os show and really enjoyed myself. The opening band, Lioness, was a lot of fun. I will be inviting them to future Dance Parties via their sweet self-titled album. K-os was pretty fantastic, as predicted. I coveted his outfit and his ability to perform high kicks. Let it be known that “Crucial” and “ELEctrik HeaT – the seekwiLL” are my jams.

This weekend marked this guy and I’s fourth anniversary, and we celebrated by going on an epic antiquing excursion, followed by martinis and Star Trek (lovelovelove). Despite my initial excitement over both Wolverine and Terminator: Salvation, I think Star Trek might win the nerd war, due to an unfair advantage: it has SPOCK.

One last good: Drag Me to Hell looks kind of awesome.

Bad: I watched 11 movies this long weekend and I will never get that time back.

This week has considerable less time allotted to hermit-ing. Third Wednesday is this week at the Foggy Goggle from 5 to 7 PM—please come out and say “hi”! We’ll be discussing how Nova Scotia election candidates are/aren’t using social media.

I’ll be checking out the Terminator premiere this Thursday. I may have harsh words for this “McG” character once its over. Usually a friend of Crispin Glover’s is a friend of mine, but I may have to make an exception…

Disconnected and it feels so good
https://haligonia.ca/disconnected-and-it-feels-so-good-2138/