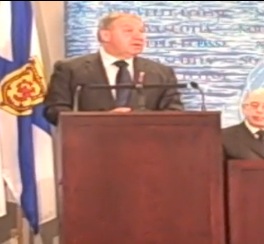 "We care about the health and safety of every Nova Scotian, which is why, as a province and as a society, we will not tolerate domestic violence," said Premier Dexter. "This plan was developed to further help those affected by domestic violence.

"It is important that government ensures the right programs and services are in place, and that the people who need them know how to access them. This plan helps us do that."

This comprehensive, strategic and targeted plan was developed in response to the June 2009 Report of the Domestic Violence Prevention Committee, and is based on the collaboration of 16 government groups.

The Domestic Violence Action Plan examines:
— current provincial measures to address domestic violence
— ways to work smarter across government to do more using existing resources
— the need for additional investments in areas that will offer the most benefits in a timely and cost-effective way.

"We are pleased to see a plan that brings services and resources together across government to more effectively deal with domestic violence," said Stephanie MacInnis-Langley, executive director of the Nova Scotia Advisory Council on the Status of Women. "As a community, we all have a shared responsibility to make sure people are safe from domestic violence. This plan sends a strong message that domestic violence is not OK, and will not be tolerated."

A key part of the plan is developing a specialized domestic violence court program to increase support for victims and rehabilitation services for offenders.

The pilot project, in Sydney, will offer victims and their children much-needed services in a timely and effective way and provide meaningful intervention with abusers.

Experts in the field of domestic violence will develop and evaluate a court program that will offer people who commit abuse opportunities they need to make lasting change.

In 2009, the Domestic Violence Prevention Committee, made up of community and government members, produced a report with recommendations to government.

For a copy of the Domestic Violence Action Plan, visit http://gov.ns.ca/news/smr/2010-12-03-Domestic-Violence-Plan/ .