Just because we are taking off the winter tires and packing up the winter coat doesn’t mean we can’t still hit the ice.

For the past month, a friend and I have been skating at the Centennial Arena. From 9 p.m. – 11 p.m. for a $4 admission, you can skate 12 months of the year on Sunday nights. No helmets required. 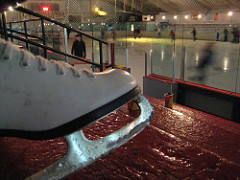 My skates are old, 23 years old to be exact. They are “figure skates”, for those who can do “figures” I suppose. I guess that explains why I could never really skate with them. My friend just bought a fancy pair, the kind that you turn a dial and the laces are tightened. Go figure.

It is here where you can you listen to Wilf Carter, Charlie Pride and Lady Gaga blaring from the same speakers. There is music to please all age groups in attendance. My friend thinks that the exact same music is playing from when she went there as a kid. “Really?” I said, as I clumsily laced up my rusty blades. Lady Gaga was in diapers when I bought them. 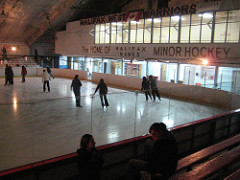 Stepping out onto the ice was weird. So used to skating on a bumpy pond surface, it was wonderful and smooth at the arena. Everyone skates in the same direction for about 15 minutes, then switches to the other direction – you can hear people groan as they say “I skate better in the other direction”. The majority of people are just doing their best to stay upright. It’s a happy, fun atmosphere.

In the center ice area members and former members of skating clubs in Halifax look like graceful swans practicing their jumps and spins. It’s nice to watch them as you take a rest in the stands. They give figure skates their name.

Skating among the pack are a few people with yellow arm bands. I wondered if they were members of a singles club but I later learned that they were security. They are good and fast skaters too.

Once in awhile you’ll hear a yelp from someone who wiped out and then bashfully stands up, brushes themselves off and then starts again. It’s common. It’s perfectly okay. I know because every time I’ve gone, I’ve wiped out (except last time but we didn’t stay the entire 2 hours either). One time I wiped out just after the Zamboni cleaned the ice at the halfway mark. I was wearing grey leggings, not a good idea. I not only “advertised” that I wiped out but I was soggy the rest of the skate. The next week, I wore black.

See you on the ice…in July and August!

Don't hang up those skates!
https://haligonia.ca/dont-hang-up-those-skates-14088/