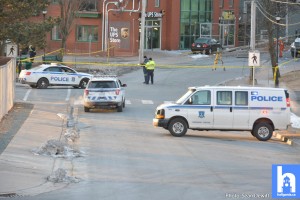 At 2:55 a.m. 27 January, Halifax Regional Police and HRM Fire & Emergency Service responded to a report of a Motor Vehicle collision, with a vehicle into a building at 1079 Queen Street Halifax. Officers located a single vehicle that had damaged the building and a utility pole. HRM Fire & Emergency Service members located a pedestrian adult male (63 years-old) pinned under the vehicle. The male was pronounced deceased at the scene. 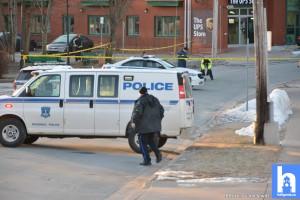 Officers did arrest a 23 year-old male driver near the scene. The driver was transported to Halifax Regional Police Headquarters for a breath test. 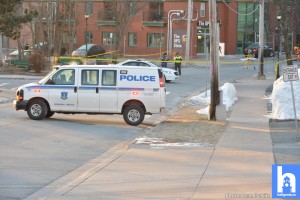 The driver is identified as Dennis PATTERSON 23 years-old, from New Brunswick and is charged with Operating a Motor Vehicle while Impaired and Impaired Driving Causing Death. PATTERSON has been remanded and will appear in court on Monday.

The deceased male identity will not be released until notification of next of kin.

Traffic on Queen Street was shut down from Kent Street to Victoria Road. Police cleared the scene shortly before 10:00 a.m. and traffic was re-opened. Utility crews remain on scene due to downed electrical lines.