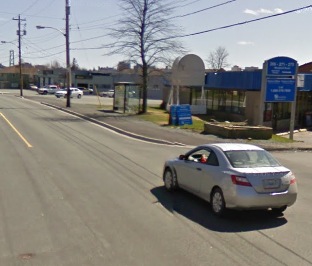 Driver hits woman but misses kids, Duly Noted Stationary gets held up, altercation at Menz Bar and a woman is held up at a Dartmouth bus stop.

View Larger Map
A male driver lost control of his vehicle while travelling Westbound on Devonshire Avenue at approximately 4:15 pm yesterday. He jumped the curb, drove over the sidewalk and into a fence near the Devonshire arena. A woman who was walking in the area carrying two small children was clipped by the car and received a minor arm injury. The children were not injured.

The 27 year old driver of the car was issued a ticket for not adhering to the conditions of his licence which required a fully licensed driver to be with him.

Road conditions were slippery at the time of the accident.


View Larger Map
A male entered the Duly Noted Stationary store at 6224 Quinpool Road just after 5:00pm yesterday armed with a silver handgun. He demanded money from the clerk and fled the store on foot. He was last seen in the Pepperell Street area.

The suspect is described as a white male, 25-30 years of age, approximately  5’8", 170lbs wearing a  black jacket, black pants, black toque and a mask or scarf over his face.


View Larger Map
Two adult males will appear in court today charged with 5 counts of robbery as well as assault and weapons related offences after an incident at the Menz Bar on Gottingen Street just after midnight.

The two accused, a 32 year old man from Windsor and a 27 year old Halifax man, were inside the establishment and got into a verbal dispute with another male patron which resulted in the patron being assaulted in the washroom of the bar. The accused then robbed two other men at knife point inside the bar before moving out onto the street.

Once on the street, the accused robbed three additional people, 2 men and 1 woman, before fleeing on foot. Responding units were on scene within seconds and apprehended both males on Maitland Street after a brief foot pursuit. All of the property stolen during the robberies was recovered.

One adult male was taken to the QE11 with non life threatening facial injuries. There were no other significant injuries reported.


View Larger Map
A 23 year old female reports she was waiting for a bus on Windmill Rd near Albro Lake at approximately 9:30pm when she was approached by a male who asked if she had a cigarette. When she said no, the male produced a handgun, grabbed her purse and told her to empty her pockets. He took off on foot with an undisclosed amount of cash. The victim made her way home and called police.

The suspect is described as a white male, approximately 17-23 years of age, 5’9 with a skinny build, blonde hair and scruffy facial hair. He is also described as having a gap between his front teeth.

The female was not injured in this incident. No arrest have been made.