It’s September. Can you believe it? I can’t – partly because the summer flew by and partly because it’s been hotter in Halifax all week than it is in Miami. Since summer is winding down whether I like it or not, I took a look at my DVD Flashback Friday projects to review how I’m doing.
I said I was going to watch Chuck, Extras, Mad Men, Big Love, Treme, Band of Brothers and Planet Earth. And I’m not doing too badly! I flew through Chuck and Extras, and caught up on Big Love. I’d only planned on watching seasons one and two of Mad Men this summer, but I’m almost done season three. I’ve started both Treme and Planet Earth but haven’t finished yet. The only thing I really haven’t touched is Band of Brothers, but I’ll get around to it eventually.

I’ve reviewed a lot of shows I think you should be watching as well. I’ve already talked about The Wire, Parenthood, Veronica Mars, Gilmore Girls and Freaks and Geeks. That leaves two shows – Dexter and The Mary Tyler Moore show. I’ll talk about Dexter, because the new season is beginning this month. 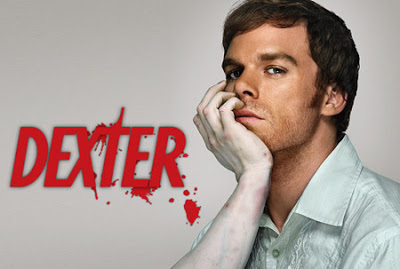 Dexter is amazing, and if you don’t like it you’re a loser.

OK, that was a little harsh. Dexter isn’t for everyone, or so I hear. It’s pretty graphic and not everyone can get behind a hero who happens to be a vigilante serial killer. But here’s the thing – if you give the show a chance, you’ll find yourself forgetting that you’re not supposed to be rooting for Dexter. You hope things work out for him, you don’t want him to get caught. You start to justify his dark past time. That’s what I love about the show. It’s so artfully done that you start questioning your own morals before you even know what’s happening.

The main character, Dexter Morgan, is a blood spatter analyst with Miami Homicide who happens to dabble in a little homicide of his own on the side. Throughout the course of the show, we find out that something very bad and traumatic happened to Dexter when he was a toddler. He was adopted by a cop, Harry Morgan, and raised in a loving family. But the damage was done. When Dexter started displaying dark and dangerous habits, Harry knew there was nothing that could be done. Harry didn’t convince Dexter to ignore his urges because he knew Dexter eventually wouldn’t be able to resist and would be caught by police. Instead he trained him, he gave him a code. He taught him who to kill and how to do it without getting caught.

In the present day Harry is long dead, but Dexter still follows his code. He only kills other murderers. He kills people who are dangerous to society, people who the police can’t catch or don’t have enough evidence against. He stalks them until he knows they’re guilty and then he carefully, methodically kills them and disposes of their bodies.

Like I said, it’s not a show for everyone. But it’s so, so good.

Dexter is great because of suspense, plot twists and the way the story grips you so I’m not going to talk about storylines too much. Usually, a season has a major story arc featuring a “big bad” – a major villain that Dexter is trying to claim for his own. Each episode will often feature a smaller story that is resolved withing one or two episodes. But Dexter isn’t all about murder, blood and violence. It’s also about characters.

rry trained Dexter to act normal. He’s charming. He’s handsome. He brings doughnuts to his coworkers. He has a steady relationship with a sweet, pretty single mom.
His sister, also a cop, loves him. He even has friends, kind of. It’s all a facade, and it’s fascinating. Then there are sub-plots involving Dexter’s sister and other detectives in the homicide department where Dexter works. And through it all, there is always the chance that Dexter could be discovered. The chance that his sister could find out the truth, or a suspicious co-worker who has a bad (and accurate) feeling about Dexter. There is a constant sense of suspense.

I often debate which season was the best. It’s so hard to say, because every season has totally captivated me. I will say, though, that the most recent season (the fourth) included some of the most intense moments and episodes I’ve ever seen. John Lithgow guest starred as the major villain, “Trinity” all season, and he was positively chilling.

Give Dexter a chance, even if you think you wouldn’t like it. You’ll be surprised how quickly you find yourself justifying (and even hoping for) the odd little murder.