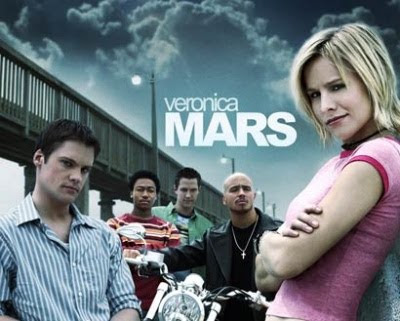 In last week’s inaugural DVD Flashback Friday post I recommended Chuck, because so many great TV-watching peeps had sung its praises to me in the past. (And in case you were wondering, I’m loving season two and that might be next week’s post.) This week, I’m recommending a show to you that I have long been a fan of – and if you did Chuck, you might also like Veronica Mars.
Veronica Mars was a fantastic show. Its three seasons aired on UPN & the CW from 2004 until 2007. If you like Buffy the Vampire Slayer, Chuck, Gilmore Girls, Murder She Wrote or Magnum PI, or grew up reading Nancy Drew, then I think you’ll like Veronica Mars.

The main character, Veronica Mars, is a feisty high school student living in a corrupt small Californian town called Neptune. After her best friend Lily is murdered, her world gets turned completely upside-down. Her father, the town sheriff, goes after Lily’s parents and loses his job when another man confesses. Her mom splits town, her boyfriend (Lily’s brother Duncan) dumps her and she becomes an outcast at school.

She spends her time working with her dad, now a private detective, solving local crimes while trying to uncover the truth behind Lily’s complicated murder. The second season follows a similar theme while Veronica works to solve the mystery surrounding a fatal school bus crash. The third season, in which Veronica attends college, sees Veronica looking for answers regarding a string of on-campus rapes.

Ratings were down for the show’s third season, but I felt the show was strong through to the end. Veronica in college provided the show with a fresh environment, and the campus rapes storyline was really interesting. I only wish that the show had been given a fourth season – or at least a final television movie – to wrap up some loose ends. 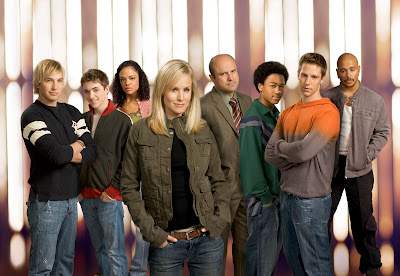 Each episode is exciting and captivating, and the larger story arcs have you on the edge of your seat throughout the season. Veronica Mars is one of my personal favorite characters in television history – strong, sassy, emotional and tough – and her relationships with other characters on the show really raise the caliber of the series. In particular, her unique relationship with her dad, her strong platonic friendship with Wallace, her you-scratch-my-back-I’ll-scratch-yours relationship with biker boy Weevil and her epic romance with Logan bring a layered, realistic feel to the show.

The writing is sharp and witty as well, and Kristen Bell brings just the right amount of snark and softness to the role. (She’s one of my favorite actresses.) And even though the show centers around a strong female lead, the show is written in a way that makes it a great pick for guys as well as girls.

Stay tuned for more DVD Flashback Friday recommendations! Among other shows, I’ll be talking about The Wire, Freaks and Geeks, (more) Chuck, Mad Men and Extras. And if you’ve got a summer DVD project that you’d like to talk about, message me on Twitter or Facebook about guest blogging!