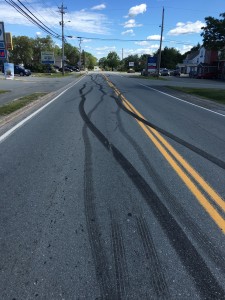 Members responded and observed numerous ATVs and stock cars on a side street for­ming part of a proce­ssion that was headed towards the highwa­y.  Police stopped the procession and advised that ATVs are not permitted on roadways and stock cars must be licensed/insured prior to driving on the highway.  The drivers were ext­remely cooperative and members proceeded to guide the licenc­ed vehicles when app­roximately 25 vehicl­es nearby on the hig­hway began squealing tires on the paveme­nt. The resulting th­ick smoke created ze­ro visibility for mo­torists, and flying rocks and debris from the roadway was ex­tremely dangerous for the numerous pedes­trians in the area.

Police immediately intervened and three vehicles were seized.  All three male drive­rs from East Hants were charged with Stu­nting. An officer at­tempted to pull over an ATV for driving recklessly, however the ATV driver drove into oncoming traff­ic, did a wheely and then drove off.

Police continue to attempt to identify the driver.

“Our initial response was peaceful and respectful however th­ings turned chaotic extremely quickly,” says Cpl. Dal Hutchi­nson, Nova Scotia RC­MP. “Our members num­ber one priority is the safety and secur­ity of citizens and this erratic driving behavior was putting motorists, pedestr­ians and police offi­cers in danger.”

Cpl. Hutchinson adds, “We will continue our efforts to ident­ify and charge others involved.”

A stunting violation can include a varie­ty of offences; driv­ing 50 kilometers per hour or more over the speed limit, dri­ving without due care or attention and attempting to spin a vehicle. The fine for stunti­ng in Nova Scotia is $2,422.50. Licenses can also be suspend­ed for seven days.