Join our blogger Angela Granchelli as she gives us a heads up on her days at the East Coast Music Awards. It’s Thursday the 26 Feb and  Angela is taking the bus journey to Cornerbrook. 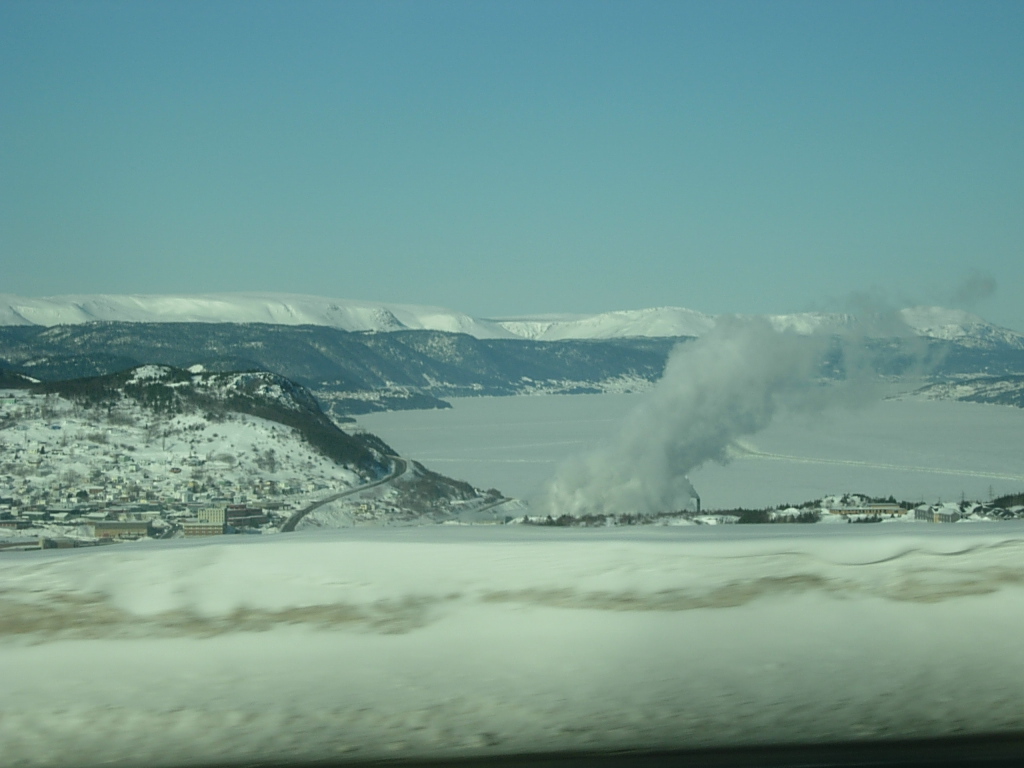 This photo was taken from the bus as we approached Cornerbrook.
Arrived in Cornerbrook at 10am and have finally accepted that there will be no sleep for this lassie today, and coffee a shower will have suffice.  Alas, I am in good company as all of us out of towners are in the same boat here on the rock this weekend.
Our bus pulled out of Halifax at 430 yesterday afternoon.  Ian Sherwood caught up to us in Truro about an hour and a half later upon the startling realization (and call from tourguide to his cell) that there was not a second bus coming to pick him up today…lol.  Talk about grace under pressure…not a complaint out of him and he hit the ground running with a smile on his face.  Good job Ian!
And that is exactly the type of thing that makes the difference between a trip and an adventure and there will be many more stories like that one throughout the course of the festival.  Our ECMA express picked up a few new passengers on every stop of the way before finally reaching the ferry for an 1130PM departure from North Sydney.  It was the best way to travel as old friends were re-acquainted, new friends were made, and of course details of upcoming 4 days were discussed.  The bus ride was full of laughter and great stories.  And once we reached the ferry the fun really began…
We all talked about how we would probably sleep through the ferry trip but when we arrived most of us found our way to the lounge and grabbed a beer to listen to the first musical showcase of the trip.  Who knew they’d play music on the ferry…splendid!  I didn’t catch the names of all the performers because there was so much going on it’s hard to take everything in sometimes, but Meaghan Blanchard was a definite highlight and will also be playing the Songwriter’s Circle on Saturday night.  That all wrapped up around 3am more or less and most of us then moved into chairs and tried to sleep without much success.  As soon as we closed our eyes it seems there was announcement that breakfast was being served.
Many dopey eyed but enthusiastic travellers got some food and coffee and got back on the bus…
Shortly after, Port aux Basques stretched out her great arms to meet us.  I really was not prepared for the bleak landscape, and stark beauty of NFLD.  It gives me a much greater appreciation for my friends from the rock now that I have experienced it myself.  I believe only a special breed of people could live in a land so vast and so harsh.  Truly it is a rock, and the highways have been blast out to carve a path through the island.  It provices a surreal, yet humbling experience.
We drove though about 2 hours of nothing but mountains, water, and rocks to finally arrive in the very charming destination of Cornerbrook…and now the adventure will really begin.
More tomorrow…gotta go volunteer for a few hours in the Buyer’s Market and then check out some music…the reason we are all here!
Tonight is the big kickoff with Matt Mays, Hey Rosetta!, and the Novaks I have been told by Joelle who has been kind enough to lend me a spare room in her home.  When there is no room at the inn, the team at the ECMAs get creative and make sure everyone has a place to rest their head at night.
I am in good hands now…
The hospitality of NFLD and the ECMAs are in fine form…thank you Joelle and all!