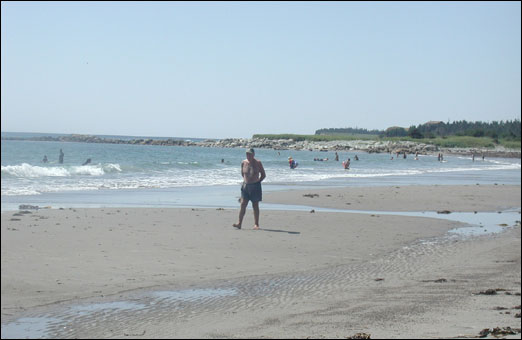 Chito, the editor's father, enjoys a stroll on Martinique Beach.

The following editorial was written by Benedetta (a.k.a. Benny) Holmes, editor of the Bedford Beacon. Benny was born in Italy and spent her first six years of her life on the Tuscan coast before immigrating to Canada with her family.

After an uneventful flight on Thursday morning we land in Toronto.

School was finally out, Bedford Days celebrations were over and the kids were anxious for their summer to start.

We land at Pearson International Airport and after only 15 minutes make it to the gate!

After walking for about two kilometres we reach the carousel and wait for our suitcases to arrive.

With the kids in tow I head outside to find ourselves a cab, and we are soon immersed in big city traffic.

Other drivers are honking their horns at each other, angry at slow cars, fast cars, cars that cut them off, cars that stall…

After a thirty minute drive we leave the city behind and are driving towards my childhood home in beautiful King City.

The memories come flooding back as the taxi heads up the driveway towards the house.

The kids jump out of the car and I’m reminded for the millionth time of my own childhood.

As they run around their grandparents’ backyard, a two-acre property with beautiful huge pine and poplar trees, to name a few, I think of the times I enjoyed the freedom of the outdoors with my siblings.

A weeping willow sits at the back of the property, a majestic tree that has throughout the years been witness to so much activity-garden parties, swimming pool action, a wedding…much laughter and many tears.

I remember my parents watching us with smiles on their faces, knowing that they had made this happiness possible for us.

It is how I look at my children now, understanding why they have smiles on their faces as they run around in this little piece of heaven.

The next day we leave for North Bay, where my husband Reed grew up. His parents still live in the same house where Reed was raised.

I know that my in-laws are experiencing the same kind of happiness as they watch their grandchildren swimming in the beautiful waters of Lake Nipissing, in Northern Ontario.

In their grandchildren they remember Reed, who enjoyed the same happiness and freedom.

Yes, home is where the heart is.

Six years ago, we moved from Toronto to Bedford.

We left a lot of “heart” behind.

The lure of the ocean soon had Reed out surfing, in rain or snow, in sun and cloud.

The children adapted quickly to a new life in Nova Scotia.

They too loved the ocean and were attracted to the forest in our backyard.

Visitors were always enthusiastic and fell in love with the province.

Life happens, and we have been dealt many ups and downs in the past 6 years.

But I have come to realize that whether I’m in Nova Scotia or Ontario, friends and family influence my life daily, whether they are near or far.

My father died of cancer a year ago.

The house in King City holds many memories.

But my father loved Nova Scotia, and was our most frequent guest. I have many memories of the many things we did together while he visited.

He was an amazing sailor who won many regattas on the Mediterranean Sea. He was a true captain, at sea and on land.

As much as it was hard for the two of us to be apart, he showed me the beauty of everything around me.

He taught me that home is where the heart is, no matter where I am.

Editorial: Home is where the heart is
https://haligonia.ca/editorial-home-is-where-the-heart-is-3629/