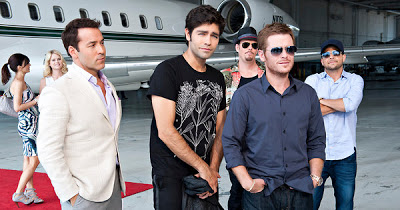 Well, at least the final season of Entourage was consistent, right?

I’ve spent much of this eighth season (and really, most of the past couple years) moaning about how Entourage lost its swagger, got too predictable, boring, off-track, etc. I’ve had a lot of complaints. And the fact was, there was just no way the show could adjust course at this late stage in the game. So considering how poor the last few seasons of Enourage  were, the series finale was, well, fine.

One of the biggest problems Entourage has always faced, I think, is that they use struggle as a tease rather than an actual plot device. Nobody’s ever down for long, everything always ends well. No one sacrifices, suffers, or is permanently damaged. And did that ever hold true for the finale.

Vince had an amazing 24 hour long date with Sophia and then jetted off to marry her? Really? I don’t know what bothers me more – that it doesn’t seem like a girl like Sophia would marry a stranger, or that the writers never let us get to know Sophia well enough to gauge whether she’d do something so rash.

E and Sloan end up together? Sorry, but there was way too much back-and-forth in their relationship over the past few seasons and not enough on-screen chemistry for me to believe that those two were meant to have some kind of epic love story. I never believed that Sloan still loved E and I never really believed that E was head over heels for Sloan. Now they’re going to run away and raise a baby together in New York? Or are they staying in L.A.? Did they even attend Vince’s wedding? Do I even care?

Least believable of all was the fact that Ari quit his business and ran away with Mrs. Ari, who was oh-so-willing to take him back. Are you kidding me? After all that? Despite Jeremy Piven’s great performance in the episode, the epiphany was just too far from Ari Gold’s character to ring true. Sure, they teased us at the end with the idea that Ari could immediately have a change of heart and take a big studio job back in Hollywood – but that’s all it was, a tease. For the Entourage movie. That will probably also be carried by some unnecessary tension only to be tied up in two hours with a big, shiny, happy bow.

What did you think of the finale?