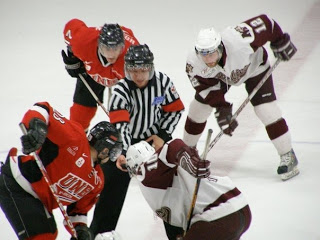 Tonight’s UNB/SMU Hockey Game the Main Event
The Halifax Mooseheads will be playing 2 home games this weekend at the Metro Centre, but the biggest hockey contest will be played Friday night at the old Forum on Windsor Street.

The undefeated UNB Varsity Reds and nationally ranked SMU Huskies will do battle in what should be an outstanding hockey game featuring (with apologies to Acadia) the 2 dominant teams in the toughest conference in Canada at the university level.

The clash figures to be the headliner in an exciting varsity weekend that should have AUS sports fans living in Halifax treated to a thrilling weekend of action on the campuses of Saint Mary’s and Dalhousie.

Mike Danton, the former NHL player who has spent the last five years in prison and is now enrolled at SMU, is not expected to be in the Huskies line-up. However, a Saint Mary’s official did say this week that he imagines Danton will be playing for the Huskies “sooner rather than later”.

Regardless, Friday’s tilt is setting up to be a classic, with the Varsity Reds ranked first in the country, and the Huskies ranked seventh and coming off an 8-3 trouncing of the Dalhousie Tigers last weekend.

Saint Mary’s defeated UNB in the AUS playoffs last season to win the 2009 AUS championship. Both teams qualified for nationals and the Varsity Reds went on to win the CIS championship, while the Huskies suffered one of the sport’s most historic collapses in the semi final game vs. Western.

The teams have played each other twice thus far in conference play with the Varsity Reds winning 7-4 at the Forum and 2-1 in Fredericton.

The Reds feature the nation’s leading scorer, Hunter Tremblay, who has 36 points through 16 games. The Huskies counter with 3 players in the top 15 in Canada, including last year’s AUS MVP, Marc Rancourt, with 27.

The Huskies enter the game with a record of 10-3-4, good for 24 points and third place in the AUS, just 1 point behind the surprising Acadia Axemen.

The Huskies will have to get right back to work the next evening, as they’ll host the UPEI Panthers at 7:00 at the Forum. The Panthers are currently in 5th place with a record of 7-8-2.

The nationally ranked Cape Breton Capers and the undefeated Saint Francis Xavier X-Men will be looking to continue their success this season vs. a Tigers team that has struggled mightily to match up with the full court athleticism of both opponents.

The Tigers seemed to have recovered from a midseason swoon that saw them drop 5 of 6 games, including 3 combined conference losses to St. FX and CBU, each defeat by double digits. Dalhousie opened conference play this term with a weekend home and home sweep of the Acadia Axemen this past weekend.

However, the nationally third ranked X-Men and the extremely athletic Capers will be a much tougher test and will provide a weekend proving ground for a group of Tigers that sceptics say cannot play with transition basketball teams.

The Tigers are ranked ninth in the country but sit tied for fourth place in the AUS behind STFX, CBU, and a SMU Huskies team that is beginning to look like a serious contender for a conference championship.

Simon Farine leads the Tigers with 22 ppg, and averaged 27 ppg over the weekend vs. Acadia. The X-Men feature their own high scoring guard in the form of Halifax’s Christian Upshaw (21.5 ppg), and the conference’s best scoring defence, allowing only 68 ppg. The X-Men’s full court pressure defence figures to be a challenge for Farine and backcourt partner Andrew Sullivan.

The Cape Breton Capers present their own set of problems with their dynamic team athleticism and high octane offence that leads the conference in scoring with an astounding 95 ppg. The Capers only loss this season in conference play came at the hands of the X-Men. CBU will be looking for a measure of revenge having been eliminated by the Tigers in the past 2 AUS Championships. This year’s tournament will be played in Sydney giving the Capers a huge home court advantage.

The Tigers will host Cape Breton at 8:00 on Saturday night, while the X-Men will visit Dalplex on Sunday at 4:00. Both games will be on ssncanada.ca and CKDU 88.1 FM, ckdu.ca.

It was a long and painful first term for 1st year Head Coach of the Dalhousie Tigers, Anna Stammburger.

With the graduation of the Tigers starting backcourt from last season and key forward Alex Legge still rehabbing an injury, Stammburger’s troops battled hard but came up on the losing end almost every night, sputtering to a 1-6 conference record before the holidays.

However, with the return of Legge and the surprising comeback of 5th year senior April Scott, the Tigers are looking to get back into the AUS playoff race.

They got off to a great start with a sweep of Alise Brown’s Acadia Axewomen this past weekend. The Tigers looked dominant in a Friday night trouncing, 73-45, then held on to beat the Axewomen 66-64 in the rematch on Sunday in Wolfville.

Suddenly the Tigers are 3-6 and only 2 points out of a playoff spot with 11 games still to play, as optimism and excitement has returned to the Dalplex for the Tigers.

This new found energy and confidence will be put to a stern test this weekend when the mighty Cape Breton Capers and rebuilt Saint Francis Xavier X-Women come to Halifax.

Fabian Mackenzie’s Capers are undefeated in conference play and ranked 5th in the country. They are led by 5th year senior Kelsie Hodgson, the nation’s leading scorer with 24 ppg who killed the Tigers in last year’s AUS championship game, won by the Capers. Hodgson averages nearly 20 shots a game and is hitting over 40 percent of her three point attempts.

The Capers beat the Tigers 86-62 when the teams played in November in Cape Breton. CBU’s high energy, full court defensive and trapping style of play will be a tough match up for the Tigers, who rely heavily on rookie guards Anna Von Maltzahn and Trish Mcneil. However the Tigers have looked much better against pressure defence with the return of Scott and Legge to the floor.

The Saint Francis Xavier X-Women did something last weekend that few AUS teams ever achieve; they won a game at Memorial in St.John’s NFLD.

The X-Women will be a confident group coming into Dalplex after getting a win vs. the Seahawks that no other team will likely get this season. The X-Women, after going through years of mediocrity and coaching changes, have stabilized under 2nd year coach Matt Skinn and play an athletic full court style very similar to Cape Breton.

Known for their outstanding physical fitness, the X-Women attack in waves and will test the depth of the Tigers bench. The Tigers lost to St. FX 64-56 in Antigonish and 83-72 at Dalplex in November.

However the Tigers are beginning to feel very confident and have a lot of pieces to work with. Asides from Legge and Scott, Dalhousie has the best frontcourt in the conference featuring three players over six feet tall, 5th year seniors Laurie and Leah Girdwood, and the team’s leading scorer, Cailin Crosby.

The Tigers play Cape Breton and 6:00 on Saturday night, and Saint Francis Xavier at 2:00 on Sunday afternoon. Both games are at the Dalplex and can be seen on ssncanada.ca and heard on CKDU 88.1 FM, ckdu.ca.