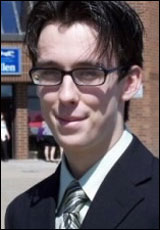 In an exclusive interview with the Bedford Beacon, Green Party candidate Neil Green answered some questions about his campaign and personal life.

Why are you running for office? Why did you decide to get into politics?

I am running for office to introduce a new outlook into politics, an outlook that will allow both the new and older generations to come together with ideas and concerns that, I believe, would benefit out community as a whole.

I believe that it is time for our Legislature to be introduced to a youthful mind who can work to connect both generations, introducing and inspiring the younger generations to become more involved with politics, while working with the older generations to develop a prosperous community for those youth.

Over the past few years, I have been leaning towards entering politics, as a youth volunteer, with an itch to get out and help in any way I could, but I had been limited due to a Heart Condition that has only been corrected since a surgery in the past year.

It was when Mr. Plato, my Political Science teacher, encouraged me to get involved, take a stand and express my opinion that I went for the opportunity; an opportunity that has already lead to such great connections and learning experiences.

When did you decide you wanted to run for the Green Party of Nova Scotia?

I decided I wanted to run for the Green Party of Nova Scotia after becoming knowledgeable to their values, and beliefs, which are closely linked to my own, while also becoming aware of their open-candidacy in my hometown.

I saw it as an opportunity to make a stand for my community, and my future.

Bedford-Birch Cove is a comfortable community, and I believe that we need to keep it as welcoming as we possibly can.

This of course would begin with making sure all our schools are top-notch, and without fault. If there are issues arising in any of our classrooms, or school hallways, we need to address them immediately, and not put them on hold. The highest education possible for our students is non-negotiable in my mind.

I also support physically active lifestyles for all individuals. What I would like to see in Bedford and Birch Cove is further volunteering and social groups to not only bring our community together, but to encourage healthy lifestyles.

I will highly support the development of recreational centers throughout Bedford and Birch Cove as a step towards those healthy lifestyles, while developing advertising campaigns to make all those living in the riding aware of health and environmental concerns.

Also, I acknowledge the transit concerns that plague Bedford.

I would push to increase the development of the ferry connecting Bedford to Halifax, while also supporting and working with HRM to consider an inner-city rail, where both would help cut back on emissions, and would benefit our environment, cut back on traffic, and help develop new jobs in the community.

Also, I would work within the municipality to assure that our main roads are redeveloped to ensure smooth and safe travel.

How do you plan on campaigning?

My campaign is focused on getting my name, beliefs and ideas out to all those who live in my Riding.

Whether it’s through door-to-door, public appearances, or publicity, I want to show Bedford and Birch Cove that I am not too young to be fully dedicated and involved at this level of politics.

I will never, ever, besmirch any of the other candidates in any shape or form, as I highly respect each one of them.

Given the opportunity, I believe that many families living in Bedford and Birch Cove would not only listen to what I have to say, but vote for me.

How do you plan on beating the other candidates?

Have you done any polling in the riding? Of so, do you have any data on current levels of support?

Currently, I have not been able to do any polling as I’ve been focusing on the campaign, and don’t exactly have any funding for Statisticians.

From what I have been able to gather though, the youth vote seems to be swaying towards my side.

What is the most important issue(s) to the residents in your riding?

Very simply, the residents in the Bedford and Birch Cove riding are looking for a change, a change that would put a brighter outlook on our community’s future.

From our transit system, to the schools, environment and economy, we find ourselves in need of redevelopment and planning.

What has Goucher failed to do adequately for the riding?

I would prefer to not answer this question.

As I have said, I highly respect each of the other candidates, and wish not to attack them.

Every person has their faults, so instead of worrying over the past, I’ll look to the future of the community instead.

If elected, how do you plan on being involved with the people of Bedford-Birch Cove on a day to day basis?

If elected, I would do everything in my power to be involved with the entire community on a day-to-day basis.

By becoming as involved as I can with the community, I would be able to not only assist in the development of a stronger community bond, but I would be able to listen to the needs and wants of all citizens, not just those who would approach me if I were in an office all day creating policies.

Town halls, community organized events, volunteering, and public appearances within the riding would allow me to get to know all residents, including children and future voters.

What is your favorite song/movie/holiday destination?

For me, it is incredibly difficult to choose just one favorite song, but as for a band that has made the music I enjoy most, I would have to choose Pink Floyd.

The instrumentals throughout every song are fantastic, as well as the lyrics.

Although, if going by the song I have listened too most, it would be High Hopes from The Division Bell.

As for a movie, which I find just as difficult to choose as a song, I would have to say I truly enjoyed The Last Samurai, as well as The Shawshank Redemption, Pulp Fiction, and Schindler’s List, all for the same reason-they were brilliantly written.

As for a holiday destination?

This is a very simple one for me. A peaceful retreat where during the day I could lay on the beach under the sun, listening to waves crashing down, while reading or writing a novel, and in the night being able to just sit cozily under the stars with friends and discuss any topic that may come up.

To me, that is the perfect, relaxing holiday.

Who is your inspiration?

This is a question that had befuddled me every time anyone has ever asked me it.

I have never found myself able to pick out a single person who inspired me to do what I do–until I learned of Justin Trudeau.

Son of Pierre Elliot Trudeau, Justin grew up as an education, environment and youth advocate, building his career in politics on these priorities.

Justin is incredibly articulate, with great charisma and passion. I find his ability to engage the audience and keep them entertained during his speeches while educating them on his issues of concern is incredible.

If I had to choose a main inspiration to my passion for my own ideas and beliefs in politics, I would say that Justin Trudeau is that inspiration.