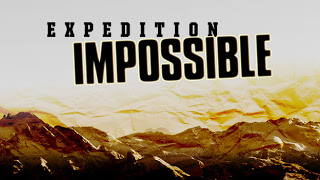 Here’s something I don’t like about Expedition Impossible: You get almost nothing for arriving first at a checkpoint! The Gypsies only got a five minute lead! I loved how one of the Gypsies said they’d traveled to over 30 different countries between the three of them, and that would help them win. Sorry, boys. But only extensive travel within Morocco will really help you here. Y’all should really consider dropping your weakest link and applying for The Amazing Race. But good call on the Arabic phrase book. (For reals, though, I think The Gypsies seem like a strong team.)

The first part of the journey required teams to ride horses, and a lot of them struggled. The Kansas girls had a lot of trouble because the horses weren’t trained like American ponies are, and the blind guy from No Limits struggled because, you know, I bet riding a horse is kind of challenging if you’re blind. Of course, the one team who didn’t struggle were The Country Boys. They were right in their element and made up a lot of ground. You definitely couldn’t say the same about The California Girls, who were terrified on the rowdy horses.

There’s A Hole In My Bucket, Dear Ida

When teams got to the next checkpoint, they had to gather water to fill up an urn using buckets. The catch was that the smaller buckets would fill the urn faster as the big buckets were filled with holes.

It seemed as though only a few teams noticed the holes before choosing a bucket. The Gypsies completed the task quickly with a small bucket, and the smart guy on Fab 3 figured it out right away.

The Country Boys arrived at the next task first – white water rafting. However, The Gypsies were much better rafters (kayakers? boaters? anyone?) and passed them pretty handily. What was really amazing was how well No Limits did – I was worried that Erik (the blind guy) wouldn’t be able to do as well without someone right in the boat, but he was awesome. Other people were flipping kayaks right and left, and he just sailed along easy as pie.

As teams started to move on to the next checkpoint, Mom’s Army fell into last place in the rafting.

I’m A Genie In A Bottle, You’ve Gotta Rub Me The Right Way

Teams headed into town and to use a Moroccan lamp to read a map, which would lead them through a trek to the final checkpoint. This leg (or whatever the terminology is on this show) was kind of boring to watch. The Gypsies grabbed another well-deserved first place finish, followed by The Country Boys, No Limits, The Football Players, Fab 3, The Fisherman, Team Kansas, Grandpa’s Warriors, and the California Girls.

Battling it out to stay in the game were The Cops, The New York Firemen, and Mom’s Army. OK, for real? How on earth are these men with these big tough jobs going to go back home after performing so badly? It’s embarrassing! I mean, Mom’s Army, you know, it’s two girls and their fifty-something year-old mom. They get credit for trying.

Finally, The New York Fireman found the hidden finish line – they had to ditch the befuddled Cops to do so. In the end The Cops finally found their way and made it to the finish line before Mom’s Army.

I’m still not 100% sold on Expedition Impossible, but it’s good enough summer viewing. As with most reality shows like this, there are too many teams at the beginning to get to know them all and keep track. I have a my eye on a few favorites, but there’s still a lot of fat waiting to be trimmed. I’m hoping this show will really start to pick up about halfway through, when we get down to the really good teams.