Maybe you’ve seen it in the news lately, or perhaps you’re looking at your latest grocery bill and wondering- how is it that my food costs are so high; a single cauliflower for $7…really??

Well it’s no secret- food costs are on the rise.

Although the rising costs of food can be attributed to no single factor, it’s safe to say that there seem to be some key influences leading the charge.

So let’s begin, why IS the price of food rising?

For starters, much of our food is imported. According to a report done by the Food Institute at Guelph University, roughly 81 per cent of all vegetables and fruit consumed in Canada are imported from other countries. This leaves us highly vulnerable to currency fluctuations, such as what we’re seeing now with the declining value of the Canadian dollar. There are also other factors that impact the price of food, particularly when it needs to travel long distances. For example, as transport and storage costs rise, so too does the price of food. These are costs that might be reduced or eliminated if we ate food that originated closer to home.

Furthermore, we need to grow our food, and our ability to do this is extremely vulnerable to fluctuating weather patterns, which will continue to impact the quality and quantity of food produced around the globe. As the length and quality of the growing season is affected by weather, farmers are forced to bare the results- which sometimes means  damage and loss of crops. It’s no question that food availability and security are inextricably linked to climate change.

So who feels the effects of the rising costs of food?

But particularly those who are already vulnerable to the factors that affect household food insecurity such as students, seniors, people living on low income and/or in rural and remote communities.

And here’s where it gets really messy!

It’s not just the price of food that we must consider, but also the many factors that can affect our ability to actually purchase food. For example, household food insecurity is closely related to poverty whereby the lower the household income, the higher the risk of food insecurity. Next to housing and utilities, transportation, and other essential costs like medicine, food is often the most flexible part of the budget for people living on low incomes- and often the part that gets cut in times of need. For people faced with these challenges, the price paid for rising food costs makes tough times even tougher.

So what does all of this mean?? 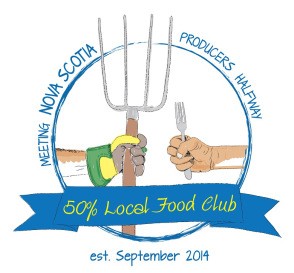 As a province and a country, we need to invest in the development and support of sustainable agriculture, and work to raise food production and resiliency in local geographies. This is a BIG opportunity in Nova Scotia, where one could argue that much of our current agricultural capacity is under-used and a good deal of our trade is redundant. According to a report produced in 2010 by the Ecology Action Centre and the Federation of Agriculture, we produce less than half our own cheese and about a 10th of the beef we eat. We’re also relatively low on production of so many vegetables that can and should be grown here. As part of the Environmental Goals and Sustainability Prosperity  Act (EGSPA), Nova Scotia has a provincial goal that states: 20% of the money spent on food by Nova Scotian’s, will be spent on locally produced food, by 2020. Let’s make that vision reality. Of course it’s not always possible for everyone to shop at farmer’s markets, but the argument remains: it pays to buy local. Across NS, communities are waking up to the action around local food and discovering both the joy and benefit of supporting locally based businesses. 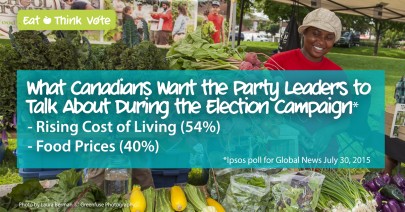 At the end of the day, when enough nutritious and culturally appropriate food  is made available, in such a way that farmers are treated fairly and care of the earth becomes a priority, the fact remains: people, in every community, still need to be able to afford food. These are two very critical sides of a coin that we must continue to analyze and address. Let’s find the path forward that allows every Canadian to eat healthy foods that they enjoy, every single day- for generations to come.