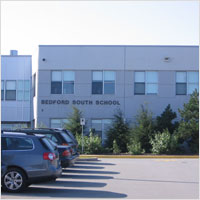 Two teenagers vandalized Bedford South School last night. The damage is expected to be around $10,000.

At 12:30 a.m. Halifax Regional Police responded to a call of a break and enter in progress at Bedford South School located at 2 Oceanview Drive in Bedford.

Two youth were apprehended in the area. Both had cuts to their hands. One 16 year old female and a 16 year old male have been charged with break and enter and mischief.

They have been released from police custody to their parents and will appear in Halifax Youth Court at a later date.

Damage to the school was extensive. Windows were smashed throughout the interior of the school. Property in the office was damaged, as well as several computers within the school. Inside the school it was observed an estimate of $10,000 in damage.

Extensive damage at Bedford South School due to break-in
https://haligonia.ca/extensive-damage-at-bedford-south-school-due-to-break-in-15459/