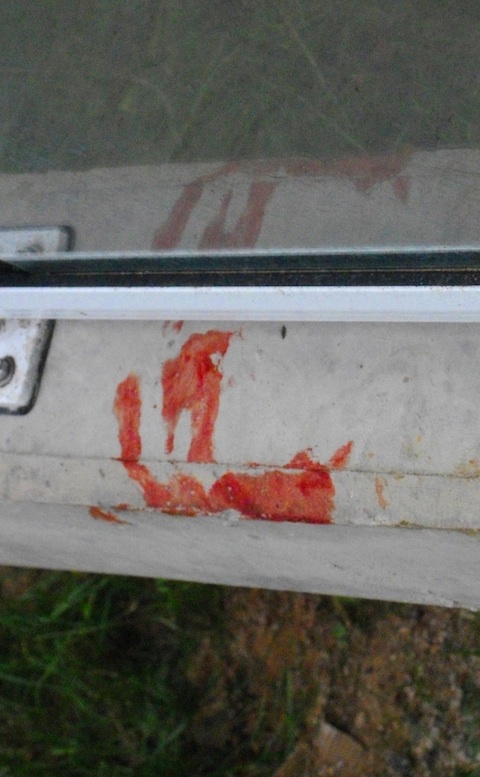 AS CRAIGNESS! I enjoy experiencing crazy things with unique and interesting people, but it's a show, a character I created and I am always in full control of the situation. But nothing prepares you for the acts of seamlessly random and pointless evil that this

Creature we call MAN, is actually capable of.  This is something that I learned and encounter first hand in the early hours on Friday the 26th 2010. A day that I will remember for the rest of my life, for that is the night I came Face to Face with a Violent, out of control MURDERER.

My Daughter was sound asleep in her Dora the Explore bed and her Grandmother, who stays with us during the week, just recently drifted off to dreamland, I was settling down for the night as well. I'm normally fast asleep on my futon in my living room at midnight, but tonight I stayed up waiting on my partner who has been working an obscene amount of hours for the last month, who was scheduled to work the night shift, but switched it up so that we could enjoy a rare night together falling fast asleep in each others arms. She arrived home at 12:15 am and we enjoyed a few minutes of TV together before she drifted off to a well deserved sleep.

I did my nightly routine of turning off the lights and locking our doors in our First floor apartment and then, I curl up next to my Beautiful girlfriend and quickly begin to drift off as well.

The cats were restless tonight, which was not uncommon, those little bastards have kept me up on numerous occasions but tonight they were different.  They tend to like to stare out of our patio doors and I'm sure imagining that they were Lions or Tigers roaming the great Serengeti, so I thought nothing of them jockeying for position behind the drapes when I heard a banging on my Deck. I turned to drapes and then I see it, a large shadow of a man standing on my deck.  I quickly get out of bed and move to the patio door, which startled my Girlfriend who at that moment wasn't sure if she was awake or trapped in a confusing dream.  I Bang on the door, still thinking that the shadows where playing night tricks on my eyes,  I open the drapes and peer out and I see this large, Drunken man staring back at me, eye to eye, inches from my face.  I holler for him to get off my deck, believing that he was just a confused man who had too much to drink and climbed up onto my patio believing it to be a friends. Once again I holler “Get off my deck.", then that's when I see it, the blood and the large knife if his hand. He kicks at the glass and screams something that I can only describe as words that would come out of the FRANKENSTEIN monsters mouth.  I close the drapes and tell Laura to dial 911. She quickly, in a state of panic grabs our daughter and wakes her Mother Screaming "There is someone on our deck!" With our child now screaming in terror and 911 on the line they exit the apartment.  The Monster on the deck continues to kick and punch on our Patio door.  I once again open the drapes and stick only my head out, for you see, I was in my underwear and the only thing going through my mind was, I don't want this jack off seeing me in my underwear.

The unintelligent of this mad man on my deck continues with violent moans and grunts. "You aren't coming in" I calmly say to him.  He gestures with the knife, for me to come out and confront him. Once again " You aren't coming in.  Get off my deck." He kicks again. Up to this moment I felt nothing, no fear, no panic, just embarrassment for staring down a violent man with a knife in only my underwear.

With my family safe out in the hallway, the panic and confusion can be heard from the other tenants who are now in the halls wondering what the hell is going on. Now I'm pissed. I close the drapes once again, which pisses him off and he starts to kick the door again, this time with much more force.

I quickly dress thinking to myself, does this idiot really think he can smash through my patio doors.  I return, this time ripping the drapes fully open to see the Knife wielding man stumble backwards and fall over my first floor railing.  He gets up and runs towards the ATV dealership that is directly behind my apartment. I stand on my deck watching a scene that resembled something out of "America's dumbest Criminals”, for you see, in order to get to the parking lot of the ATV dealership, he has to get through bushes, a fence, a small brook and then up a gentle slope that would take him to the parking lot and a few minutes from the main road.

I stand there, knowing that the RCMP must surly be on route, watching him as he attempts to get through the bushes, he gets caught up in branches of a dying tree, confused and stuck, as if trapped in Spiderman’s web or something, he starts to chop his way through  with his Butchers Knife, then he climbs the fence, falling over top of it and landing with a thud, rolls into the brook, flops around in the water for a few moments trying to figure out how to get up.  He then manages to get to his feet and this gentle incline must have been the hardest thing this drunken crack head must have ever encountered in his life..  Waving the knife in the air, reminisced of a re-enactment the final scene from Texas Chainsaw Massacre as being preformed by some Pathetic inbreed hillbilly.

I called out to him, he didn't respond.  I run out of my apartment to chase this fucker down but was stopped by my Crying Daughter and my Girlfriend who was in tears as well.  I get on the phone with the 911 operator and return to my deck with My Mother in-law and my Landlady as we watch this pathetic crack head attempt to make his run for freedom. I instruct the 911 Operator exactly where he went, into the Grave Yard across the street.  Moments later the K-9 unit was on site and the scent was easily picked up and off they went.

Now my apartment starts to full up of RCMP officers and I walked them through the events, moving out onto my deck and for the first time I turned on the light revealing that my railing was covered in blood and a large bloody hand print was left behind.

Still at this point fully unaware of the violent Murder that has taken place a few blocks away, I gave my statement to the officers who then informed my that the suspect was in custody and if it was any consolation, the police dog took a good chunk out of him as he was trying to flee.

As the excitement starts to wind down and Major Crime moves into to collect evidence, I have a conversation with my Landlady, she revealed that the same man tried to get buzzed into the building next to us by saying he was with the newspaper.  She then apologized to me.  “Why" I asked, she replied saying that she seen the man trying to get up on my deck, but thought it was me, all drunked up.  Now this is funny, because if you knew me 2 years ago, that scenario would be very possible.

My family is safe, my friends are safe, and I feel for the family and the residents of the building where the bloody carnage happened, but I take two things out of this, and I know they say Suspect.. Innocent until proven guilty, but I saw this man.. Stared into his deranged eyes.. He's guilty alright, guilty as fuck and I take pride in being a part of this man being caught and arrested so that Joseph Walker's family can have some justice. And as well I know that the police force and RCMP are often criticised for how they sometimes perform their duties, but not from me, not tonight, not ever. With in a 2 hour window of when the first 911 call was made, they had the suspect in custody. They were hero's tonight and I respect them for that.

Since this encounter I have learned that the man on my deck has been identified and charged with Second-degree Murder which if convicted could be sentenced 10-25 years in prison. For the sake of the community and the deceased family, I hope that this charge may some how be changed to First –Degree which comes with a 25 – life sentence.

Face To Face With A Murder
https://haligonia.ca/face-to-face-with-a-murder-29720/