Ally: I don’t know. How do you top a post like All the Way with Stephanie Kaye? After that masterpiece, writing today’s post as L-A’s co-blogger is sort of like giving birth in the next room to Beyonce. I mean, whatever I produce won’t be Blue Ivy. Speaking of which, did the song Glory bring embarrassment cringes to anyone else?

I don’t know, right? Like, while other parents (ALLEGEDLY) were being turned away from seeing their kids in the NICU, Jay-Z was busy ensuring the baby’s wails would make it on a birth announcement track. With that said, I love the song.

Internal Snarking on the Fashion at the People’s Choice Awards

By internal snarking I mean talking and giggling to myself at 7:30am in my home office. Sometimes I really miss other people. I’m fun and all, but I can only laugh at my own jokes for so long. I had watched a little bit of the awards show on Wednesday night, but couldn’t stay up long enough to truly judge the “outfits”. So I hit up Google to see what I missed. 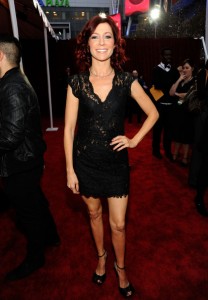 This is a big fear of mine. That I will be under the illusion that I can still wear mini-dresses at age 40 (is she 40?). This upsets me.

It’s time for The Interpretive YouTube Video of the Week™ :

(Editors note: The Interpretive YouTube Video of the Week™ essentially describes what we are feeling at said time when reviewing an item – whether it be a person/thing/donkey. In this case, it means to say, “I think Carrie Preston looks a wee bit like she works at Cheetahs“)

If I were to be honest, which I always strive to be on Friday’s, I would disclose that this song has now been downloaded and resides on  my iPod next to Christina Aguilera’s, Dirrty. It’s been a weird week.

Carrie Preston was one of the least worst ones. Yay for grammar! 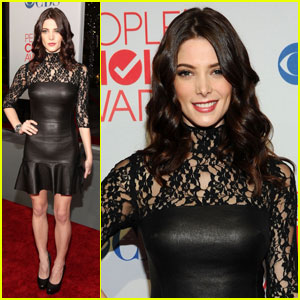 You cannot tell me there was nothing else she could have worn. Why would you DO that with leather?

Even Kaley Cuoco, who I just adore, completely failed me. 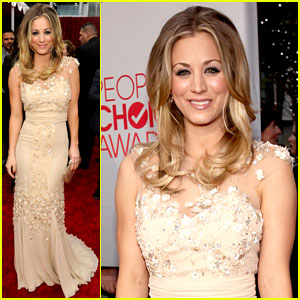 I’ve spent far too much time on this. If you would like to have a good laugh, or ensure nightmares for your Friday night bed rest click here for more damaging photos.

Favourite Non-Crappy Video of the Week:

Over on Ben’s Facebook (He’s seriously getting a lot of airtime on FPQT lately. You other people need to raise the awesome), he flagged this video as one that best highlights Stacey Dash’s pretty.

Take note, Carrie Preston. This is how you do 40. Ben’s comment was…

This entire video is all about her pulling those sunglasses back down over her tears. DO MORE OF THIS, KANYE.

We will agree to agree on that.

Remember earlier when I talked about embarrassment cringes? When you literally feel physical pain for someone’s lack of awareness? Let’s be real here, if you really saw these two driving down the street in a convertible singing out their windows would you not feel SO SORRY FOR THEM? This is not to say that I wouldn’t like to reenact this very scene on Spring Garden Rd in my Ford Focus with L-A, but we’re white girls in our thirties. It’s almost expected that we act like tools.

Obviously the song is on my iShuffle. Stop asking stupid shit.

When watching BET’s The Pull Up with Toddler G we encountered the following hot mess:

Let me save you some precious time. Hit up the two minute mark. I’ll wait…

WHAT IS SHE DOING? I mean, even on my worst home office days I don’t dance around in high heels and sweat pants. Ok, I do, but I don’t shoot a music video. It was poor parenting to let Toddler G watch this, but I couldn’t pull myself away from this insane dancing. I realized what I was letting him watch when he said, “Mommy, she dance like this” and he began kicking his legs up while laying on the floor. I seriously need to look into purchasing that Juicebox business.

L-A: I think we have Juicebox as a free preview. The Husband was all, “what the hell is this?” and my answer was, “It’s the music channel for preteens. Ally loves it.” He totally accepted that answer.

Anyway, two favourites this week and then I need some sleep:

How have I not spent more time in this place? I’ve been for a quick coffee to go, as it’s near to work, but today was the game changer. I walked away with a sample of some tasty chocolate (I don’t even know what I was eating…I just know it was good), delicious coffee that was worth the wait and a warm cookie. You read that right. A warm cookie. After ordering it, they asked if I’d like my cookie heated. And the answer was, of course, “Hells yes.” Followed by, “Why doesn’t every other cookie selling establishment offer to heat my cookies? This is genius!” I wrote Ally about the place after and confessed that if they sold booze, I’d probably never leave.

Okay, it’s no secret that I’m not a giant fan of the fictional character of Carrie Bradshaw (and any love I might have had was quashed by the horror that was the second movie). But shortly after writing about Stephanie Kaye as a random style icon I realized something: Carrie Bradshaw wasn’t some kind of fashion forward style icon. No, she was just taking her cues from a Canadian eighth grader in the late 80s. Need proof? Well, here it is, starting with one of their more studious outfits: 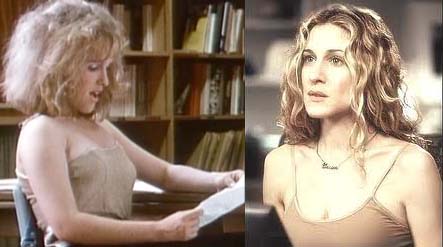 Stephanie’s got the old school, computer free library, Carrie’s got a laptop. But they’ve got the same outfit.

A little more definition to Carrie’s curls and a little less teasing, but they were both into the coloured eye shadow and the big hair. 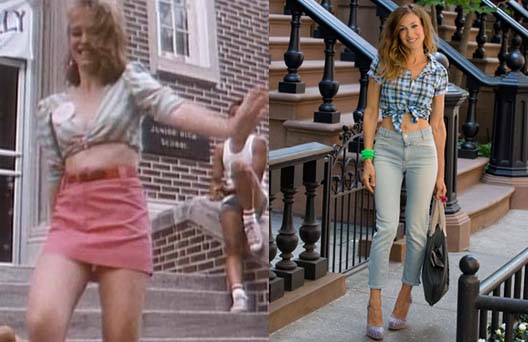 Let’s just knot that blouse up and wear it with some denim. 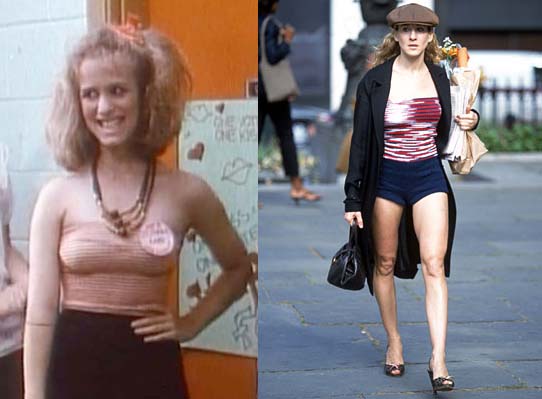 Stephanie preferred the leggings as pants over the hot pants, but both ladies can agree on the tube top. And finally, my favourite, the crochet tank top: 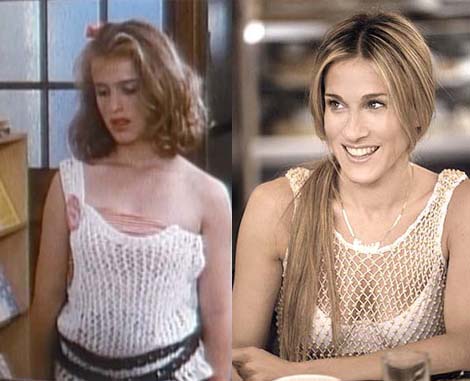 BTDubs, that’s one episode of Degrassi Junior High. I bet if I watched more than just the first episode, I’d find even more. At least now I can rest easy that Patricia Field and the costume department of SATC wasn’t completely high when they chose Carrie’s wardrobe. No, they were just mesmerized by the awesome of Stephanie Kaye.

Okay, I promise I’ll stop now with the Stephanie Kaye and the mad style of Degrassi. At least for a little while.