Ally: I’m riding on the wave of our Kardashian post and will therefore be making a mockery of the blogging industry with this entry. Look, don’t hate on my mad skillz, but I’ve got a bucket load of real work sitting next to me. This will have to be a quickie.

Guys? OH MY GRACIOUS (Toddler G has been taught to say this instead of “Oh My Gawd!” I should try that as well). The quotes are too amazing. 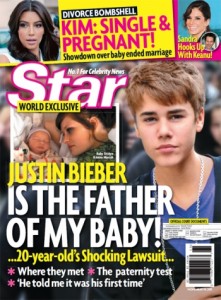 “On July 6, 2011, I gave birth to a baby boy. That was exactly 36 weeks and two days after the sexual encounter with Justin Bieber. Based upon the timing as well as the fact there were no other possible men that I had sex with that could be the father of this baby, I believe that Justin Bieber is in fact the father of my baby.”

You know what JBiebs is not hearing right now? This:

I really like Rihanna, I really like Coldplay. Those who really like quality music would probably find this mortifying. They can upside down smile all they want at my music jams. I’ll be listening to this on repeat.

I played this song non-stop on my commute to and from Halifax today and at daycare drop-off and pick-up. I now have Toddler G singing, “Could have been a princess…you let me gooooooooo!”

Rounding out the favourites this week is Drew from my current favourite reality show.

Look it’s video-overkill, but it’s all I have tonight. L-A can bring you the fashion. Or more amazing videos. I won’t let her give you the Crappy Pop Video of the Week though. You deserve more.

I think Justin Bieber’s baby-mama styled this video. Wow, that’s some amazing clothing and hair up in there. I adore when Fiddy gives her the up-and-down check out. His acting is to die for. Really, it makes me want to die. The lyrics? Friday gold. It’s crazy to think I used to live for this type of music when on the dance floor at The Palace. Dad, I’m sorry.

L-A: So. Many. Videos. Also, I totally found a crappy pop video for you this week. A real one. But only because one of my favourite people (bestest work intern ever, Glynn) came to Halifax for a visit. She is a treasure trove of video hits. And by hits, I rarely mean actual hits. But they are always solid gold.

Anyway! On to the hates/favourites!

And not for the obvious “oh noes! I ate a dozen mini chocolate bars in one sitting and now my stomach hurst and I’ll probably gain weight!” kind of way. No. In a Reese’s Piece (yes, singular) totally broke my retainer kind of way. It’s some kind of permanent wire glued to the inside of my teeth. It’s been there for years. But I figured it would take more than one Piece to take it out. And while my dentist is totally aces and I can take any dental work you throw at me like a champ (seriously. I fell asleep during a root canal), I really wasn’t in the mood to spend $40 (after insurance) on a retainer. $40 buys a lot of other things. Like extra drinks. Or shoes on sale. Or a cute new top. Stuff that’s way more fun than getting your retainer re-glued to your tooth.

Because it’s not. Not yet. So cool it, Starbucks. Even if your red cups and promises of gingerbread are luring me to your stores for overpriced coffee goodness. (Fun L-A fact: I drink more coffee than the average girl should. Like a half a pot a day).

I’m rethinking my existence as @hellopineapples. But L-A is a really hard name to work into a twitter name. Partly because of the hyphen. Partly because there’s a city out there and it’s using my name already. Anyway, I hate having a random and meaningless identity crisis mid-week. But I’m thinking of something along the lines of my recent way of introducing myself (because saying your name is L-A is weird to people), which is “L-A, like the city.”

I have never been in favour of banning or burning books, but I will make an exception for this. (My hate on for Ghomeshi runs real deep. We don’t even have time to go into it today. But there is a powerpoint about it).

I. Can’t. Even. What? I mean, that last episode has just stripped me of my powers to form a sentence. I mean really. “It Ain’t Easy Bein’ Green” because he’s Irish? If Glee can phone it in like that, then I maybe I shouldn’t feel bad when we do (no, unlike  Ryan Murphy, I will continue to feel bad).

Why the hell have I been waiting so long for this? My back is thanking me big time (I have lousy posture when I’m at the computes). The massage therapist also massaged my hands and commented that the muscles are tight like those of a construction worker or a gardener. Which is hilarious, as manual labour is not my bag. I assume it’s from blogging and crafting and doodling.

Okay, so, in hindsight, Saved! was maybe not the best choice. But I did say no to a Mandy Moore movie that also stars some lesser guy from Twilight. And watching the full season of Kidnapped was a fairly good choice on my part. I love a good crime procedural mystery type show. Especially ones that involve Pretend Boyfriends.

What? I think he aged well.

3. Making Kanye references in emails even though I know the recipient won’t get it.

Seriously, I’m still chuckling to myself, even though husband’s like, “I don’t know Kanye.” But I couldn’t help it! And I couldn’t help writing, “BOOM! KANYE!” either. Whatevs. It got me started on listening to Monster on repeat all afternoon. (I like to think Kanye is singing “Guys, guys” instead of “gossip, gossip.” It’s like he’s talking like me. Something akin to saying, “You guys! I’m a motherfucking monster!”)

4. You guys! We really do need to talk about Kevin.

I am rarely excited about books being turned into movies, but this is an exception.

I also rarely call a book a “favourite”. It’s just too hard to nail down favourites. There are too many of them and my tastes change regularly. But We Need to Talk About Kevin is one of those few.

Well, maybe not exactly like him. But the Lucky Spice at Middle Spoon is mostly whiskey and rum and the kind of sipping drink I think he’d approve of. (I can’t do the fruity, fizzy drinks lately).

6. TV that is soapy and hella fashionable

Have we talked about Revenge already? I feel like we have. But let’s talk about it again some more. I thought Ringer was going to be my favourite this season, but you guys? Revenge brings the dramz like only 1980s sequined evening soap operas can. And they do it while looking good. For example, best frenemies here: 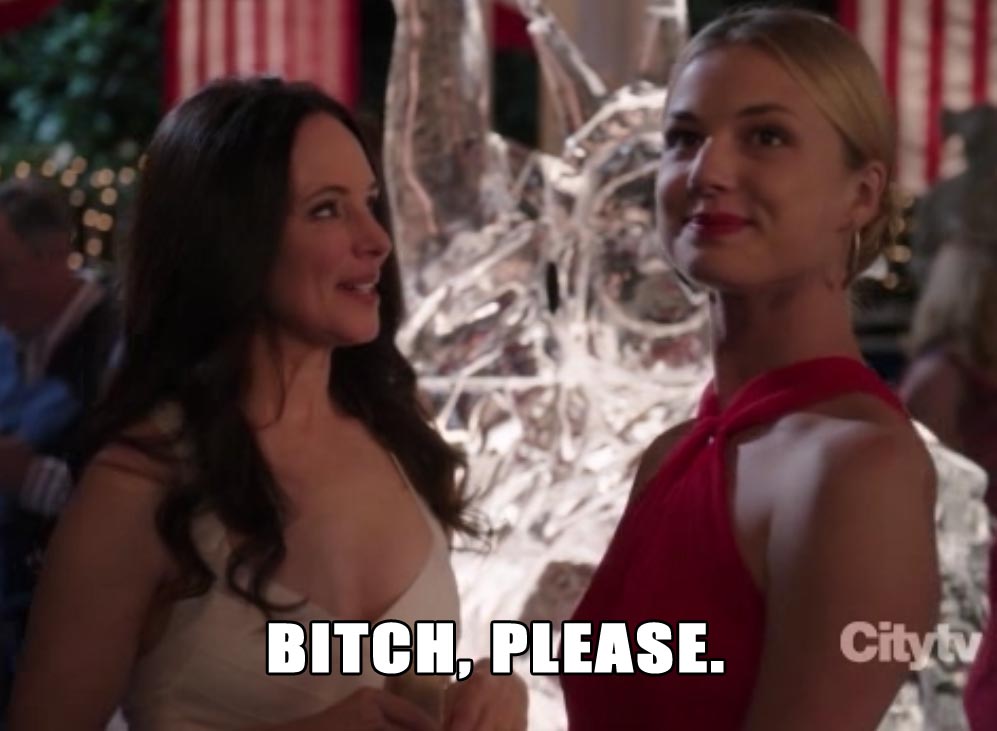 (Fun Fact: if you google “bitch, please” you find a blog post by Jill of Couchtime with).

Emily Van Camp brings the style and the dramz every week. But my favourite dress of the season is this one: 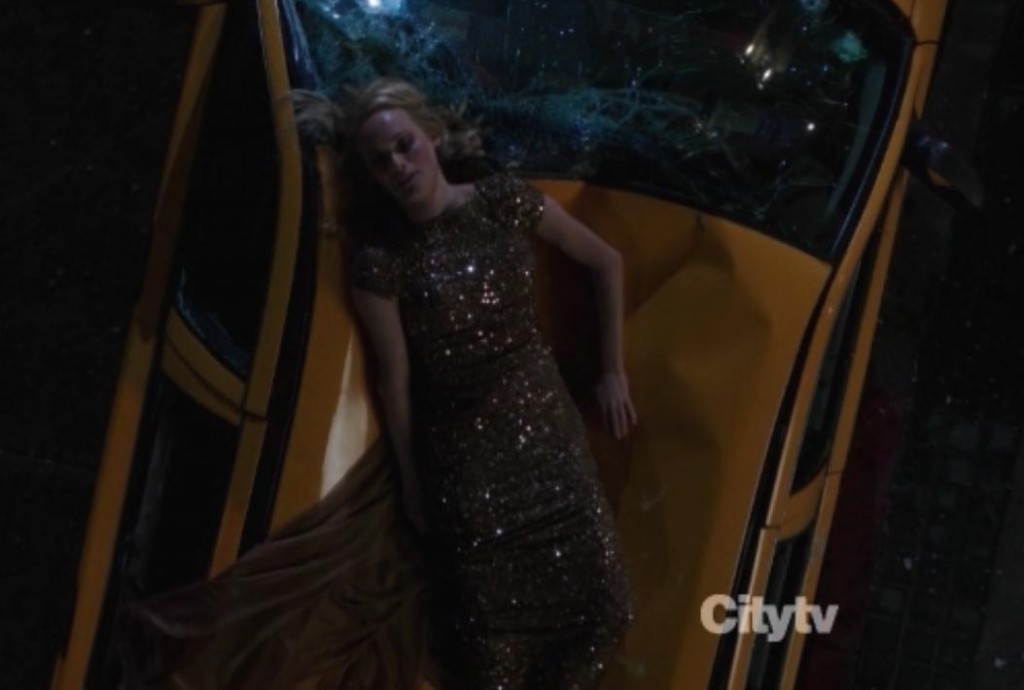 Would you believe me if I told you she survives the swan dive into the roof of a taxi?

I need a gold sequined cocktail dress in my life. And a place to wear it.

But like Lavar says, you don’t have to take my word for it. Go see what Kate, Anthony and Ann have to say about Revenge (!!!) on YKYLF.

7. If Ally hadn’t posted a crappy pop video this week…

…it totally would have been this:

I don’t even know. But I do love Glynn for telling me about it.