L-A: I’ve got some hates and favourites, so you get two posts today – Listmas AND this one. yay!

So let’s start with the hates:

1. Enough with the Ryan Gosling already. 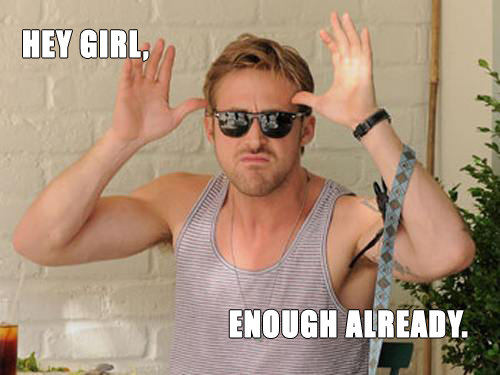 I bet you never thought you’d hear me say those words. But there they are. Oh, I still think he’s dreamy, but I’m sick of every profession/hobby/niche having it’s own “Hey Girl”. Memes are funny for a bit, but then, somewhere amidst the typographer, librarian, archivist, handmade, YA, and international development worker versions, the meme jumps the proverbial shark and I want to stab my eyes with a pen. So, let’s stop, okay? Awesome.

Now on to things that make me less stabby.

1. I’m no Robyn fan, but this makes my life a little bit better:

Seriously though. This video made me actually like the song. I could never get past the Robyn video.  Now I love it.  Now I realize the song is effing catchy and it’s been in my head all day. I possibly listened to it 40 times yesterday.

I just want to point out that Robyn is kind of a stone cold bitch. Once you get past the shoes, the crazy leggings and the catchy tune, she’s actually saying, “dump your girlfriend and make out with me.”

The shoes remind me of Skechers I owned in 1998. This isn’t a good thing.

If the person in question actually listened to crazy pants, this is kind of what the call would go like:

Dumper: So, it’s time we had the talk.

Girlfriend: About what we’re doing on Friday?

Dumper: I have my reasons and it’s totally not your fault.

Girlfriend: Excuse me? What?

Dumper: I’ve just met somebody else.

Girlfriend: What the fuck?

Dumper: I never met to hurt anyone.

Girlfriend: You’ve been cheating on me?! You lousy #@%&! Are you effing serious?

Girlfriend: You really are a fucking douchebag, you know that?

Dumper: the only way you’ll mend is when you learn to love again.

Dumper: I’m trying to let you down easy. Um. Hello? Are you still there girlfriend?

Anyway, had to share those things. Enjoy your Friday. I’m going to go watch that video again, or maybe this one:

Partly because I agree with Anthony when he replied to my email about the video with:

I think Taran Kilam is the handsomest

It’s also because the video amuses the hell out of me and that’s one way to avoid the panic over the fact that it’s Christmas in a week and I’ve got nothing done. No lights up, no presents bought. Rien. I suck at holidays.