Last month I was invited on a unique camping trip, this trip into Fundy National Park would be with a group of boys (12 to 17 yr. old) that have been forced into adulthood by the circumstances they face in their daily lives such as broken homes, addictions, violence, food insecurity, homelessness and troubles with the law. The goal of the trip was to bring these guys into woods, equip them to camp, hike and cook up their own food on an open fire. This was an opportunity to be free from the daily challenges of their lives into a wild place where boys are free to be boys!

They Swam, hiked a total of 25km, tossed rocks and made arrow heads for spears!

Many of these guys had never camped and rarely left their neighbourhoods, life circumstances have often robbed them of the freedom of being a youth  – It was so cool to see them free to explore, tough-guy teens playing like river otters in the falls of Fundy Park!

Where does the food adventure part kick in? The food skills workshops we did where centered around making high energy food cooked on the fire and the preparation of the food that they would bring on their daily hikes.

This recipe produces jerky that will store for a good year 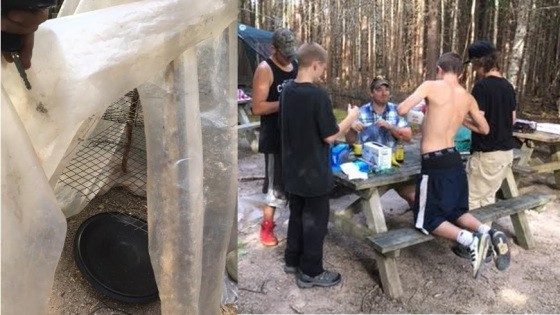 We spoke a lot about wild foods and made different types of wild tea. The Favorite was Chaga tea!

Here are the guys climbing a tree to pick Chaga 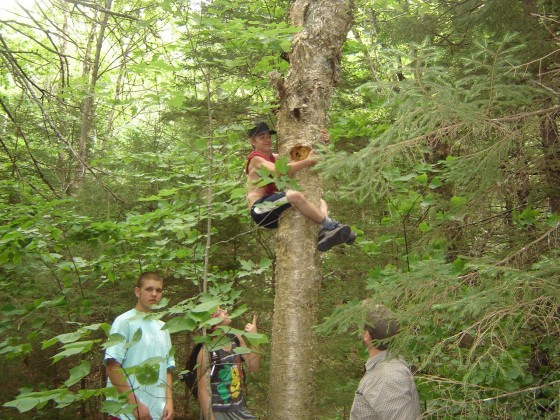 What struck me about this trip was the level of enthusiasm the guys expressed and the amount of team work around preparing wild foods and team spirit that it created. Food was the focal point of our day; tough alpha male teens, volatile situations, personality clashes etc. were sorted out and put aside around the fire and at the table. Above all, once these guys were in the woods making their own food, free to explore and push their limits they were free actually be 12-17 yr. olds and filled with self-confidence.