I was feeling accomplished today after cleaning out a ferocious looking playroom and two girl/hoarder bedrooms. It took a day and a half but the result is well worth it. I wish I had taken a before picture… actually, no I don’t… you’d be horrified and I’d be embarrassed.

So let’s just say it looked like Toys r Us exploded in our bonus room.

I was feeling accomplished after the cleaning was done and I made a delicious smelling chilli and sat down to have a glass of wine and relax before the supper rush.

I was feeling accomplished until I realized the chilli was burned to the bottom of the pot. I decided to just stir the rest and turn off the heat. No one will ever know, it still tasted great.

I was feeling accomplished until hubby came down and decided to “help” and stirred the chilli… from the bottom… exposing my secret.

I was feeling accomplished until he asked if I had added bay leaves to the chilli.

I was feeling accomplished until I had to explain that no, those were not  bay leaves, they were burned bits of chilli that he had kindly stirred up.

I was feeling accomplished until we had to pick out the “bay leaves” from our supper.

I was CERTAINLY feeling accomplished when I got my picky eater to actually eat the beans after I told her we’d have a post-chilli fart off later tonight and she could only compete if she ate the beans. Her bowl was empty pretty quickly. One of my finer parenting moments for sure!

I am feeling accomplished now. I have a clean house (parts of it anyway), two girls with full bellies and a fart contest to look forward to later on. 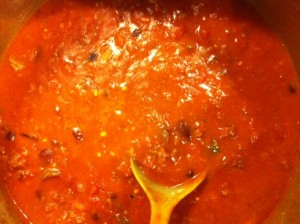