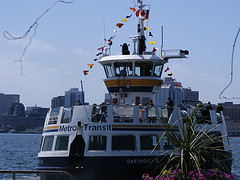 A few weeks ago I met up with a girlfriend for lunch. She works in Dartmouth and I work in Halifax so I agreed to hop on the 12:15 ferry from Halifax to meet her at Alderney Landing in Dartmouth. I had read about a new summer program on the Metro Transit ferry system where actors tell tales of Halifax’s rich seafaring history. 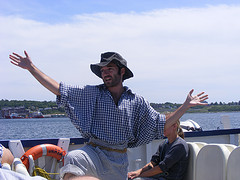 So, on a Tuesday afternoon I paid $2.25 (made sure I got a transfer ticket for the trip back) and caught a Dartmouth-bound ferry. It was a beautiful sunny day so I sat on the top deck to soak in the view and the rays. Minutes after leaving dock, out jumps Jack Tar and his friends. Jumping from seat to seat and telling a story about a battle near Sambro, ferry passengers (once the surprise settled in) soon realized that they were in the middle of an reenactment. 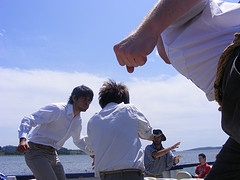 Here we were, in the middle of Halifax Harbour receiving an entertaining history lesson where the harbour itself has been the topic of text books, movies, conversation and so on. Another cool thing was traveling on the oldest salt water ferry service in North America.

It was perfectly choreographed and the length of the story was the exact length of the ferry ride. I didn’t want it to end but I knew my friend was waiting for me and I was hungry.

Ferry Boat Tales is presented by the Halifax Regional Municipality in association with Maritime Museum of the Atlantic. Produced by Heritage Explorers and performed by DaPoPo Theatre.

If you go:
July-August – Tuesday to Saturday

To Dartmouth
(Halifax waterfront at the foot of George Street)