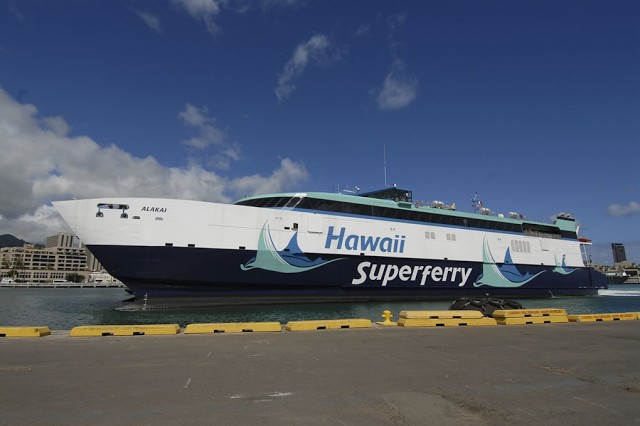 The Cat Is back!The new Yarmouth ferry service will Start June 15th, and feature a return to Bay ferries operation and a high speed catamaran . The province has reached a 10-year agreement with Bay Ferries Limited to manage and operate a high-speed ferry between Yarmouth and Portland, Maine. The 2016 season schedule is anticipated to run June 15 to Sept. 30, departing Yarmouth and Portland daily at 8 a.m. and 2:30 p.m. respectively and returning to Yarmouth at 9 p.m.Government will provide annual funding for the ferry service, including marketing, at $10.2 million for the first season and $9.4 million for the second. There will also be $4.1 million for start-up costs that will include terminal upgrades and $9 million towards the ferry’s retrofit, in lieu of two years of charter fees. This catamaran has a different hull form from the previous cats.  The vessel itself is very similar to the hull form used by the US Navy in its Spearhead class of Joint High-Speed Vessels. The vessel is rumored to be the former Hawaiian Super ferry Alakai.Built in 2007, she ran for over a year before court cases surrounding an environmental review of the ferry service caused the service to be suspended in 2009, the company went bankrupt, and the 2 ferries became the property of the US Federal government who help finance their construction. She  was auctioned off by the court in 2010 for $25 million, and purchased by the US Maritime Administration. The US Navy acquired the boat in 2012, her sister going into service in the pacific, but Alakai was renamed USNS Puerto Rico and laid up in Philadelphia. The new service is Yarmouth-based, leaving Yarmouth in the morning, travelling to Portland, and returning to Nova Scotia that evening. It will increase overnight stays in the region and provide an economic boost to Nova Scotia businesses.It will reduce the travel time in half and eliminate the need for vessel cabins and additional onboard staff. It will also be quicker than driving between Portland and Nova Scotia.Original: News conference is Booked for 1 PM with the Nova Scotia transportation minister and the president of Bay ferries.

Ferry Found for Yarmouth - the Cat is Back
https://haligonia.ca/ferry-found-for-yarmouth-136804/