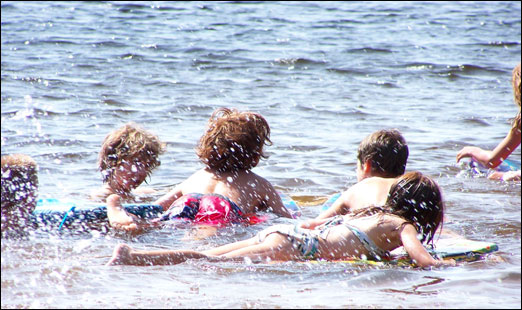 Kids cool off in Sandy Lake during record breaking temperatures.

We have been blessed with beautiful weather for the past few weeks. No one complains about “this summer is awful”. Finally, Nova Scotians are getting a summer.

The past week has brought lots of sunshine and record breaking temperatures. No one dares to complain about the current heat wave. Instead, everyone is keeping cool by flocking to the local beaches and lakes.

Temperatures today and tomorrow are predicted to reach the 30 degree mark again, but Environment Canada is calling for “40 percent chance of showers late this afternoon [and tomorrow] with the risk of a thundershower.” After such a dry spell,

And starting Friday, the temperatures will drop by a few degrees, to the mid 20s.

“It’s still too early to tell.” That’s the response ScotiaSurfer.com, a local surfing site, got from Peter Bowyer, program supervisor at the Canadian Hurricane Centre, when asked about whether Hurricane Bill will hit Nova Scotia directly.

The storm, listed as a Category 2 hurricane, was still more than 2,000 kilometres southeast of Bermuda as of noon on Tuesday. The storm has maximum sustained winds of 167 km/h is moving WNW at just under 26 km/h.

That said, as is always the case, hurricanes are notoriously fickle, so once again we return to that frustrating refrain, it’s still too early to tell.

In the meantime, those who can are heading to the many beaches and lakes in Nova Scotia.

Everyone is enjoying this blast of summer.

For tips on staying hydrated and staying cool, visit www.hc-sc.gc.ca.