Travelling, in earnest, began for me around the end of 2006 when I first moved across the pond to Germany. It was something I always knew I’d love, I just hadn’t had the chance to really get out exploring yet, having spent the previous 6 years of the new millennium in university. It wasn’t long after I started

booking my weekends away that I noticed a highly discernible trend: food, of course. No matter what my travel itinerary included, what every day boiled down to was where I was going to eat breakfast, lunch, dinner, and however many snacks I could justify… in light of getting the “full experience.” Ahem.

Eiffel Tower: check. But where can I get lunch afterward? Great Wall of China: finally! But are there food carts along the way? Pergamon Museum: yes, please. First, let’s get a brat next door. It’s a big tower/wall/museum. One must be properly and deliciously fuelled!

These days, travel usually includes a drive down the Nova Scotian coast, or a weekend getaway to another Canadian city. This past weekend I spent three, sunshine-filled days in Toronto, and true to form, every plan revolved around good food, good company, and for the most part, good drink. The sunshine-filled aspect is not to be understated, however: Nova Scotia’s weather has left much to be desired this year, with hardly any summery or warm days to speak of! Needless to say, the 25+ degree weather was a welcome treat. I also had the pleasure of having a great neighbour on the plane, who recommended several of her favourite holes-in-the-wall to eat at during my next trip to Toronto.

The weekend kicked off with a quick, catch-up lunch at Bikkuri (King Street East) with my friend Eloise, who has recently undergone so many wonderful and exciting life changes that I had to hear about them in person… and over sushi. Bikkuri had a nice, street-side patio that provided the perfect setting for our sunny lunch and long-overdue life updates. 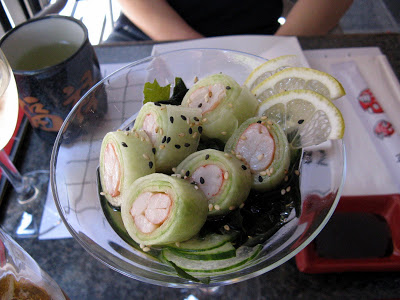 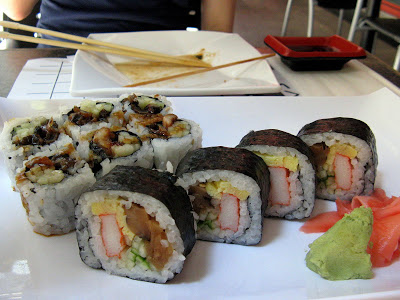 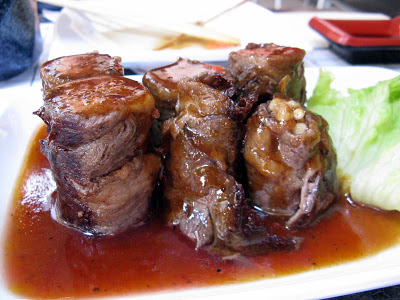 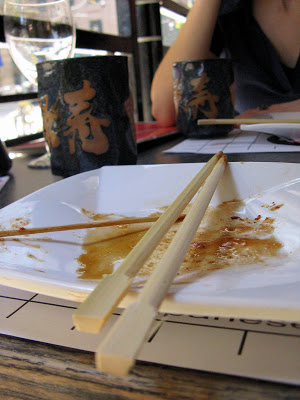 Fast forward to Saturday evening.
By this time, F. had arrived and we were﻿ gearing up for an evening of dining that we had planned for earlier in the week. During my last trip to Toronto in March, my friend Chad (who shared the Bacon Cups recipe with me) had tried to get us a last-minute reservation at Woodlot, but alas, was unable to. Ever since, I’ve had little fantasies and daydreams about actually going here, having seen some photos and read some reviews. What about “venison pie” (though only on the menu in fall or winter) and a wood-burning oven doesn’t inspire fantasy? Sigh.
We started by having drinks at a place Eloise had recommended in Little Italy, called Sidecar. Their Badass Mojito is legendary, according to Eloise, so already being in the neighbourhood for dinner, we stopped in to see what the fuss was about. We sampled four different cocktails on their menu, and I have to say, Eloise was right: that was one dangerous mojito! A few of those bad boys and I might not have made it down the road to dinner. I have to apologize for the quality of the photos from here on: I was feeling a little footloose and fancy-free (and maybe also a little bashful about my compulsive picture-taking), so they’re all taken on my Blackberry. Must get over this. Here are three of our four drinks sampled. 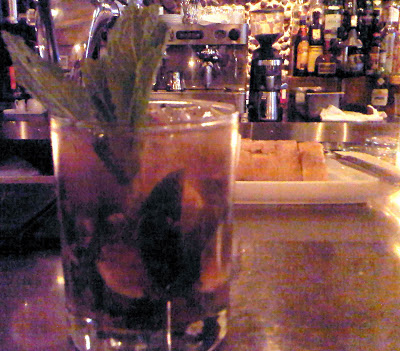 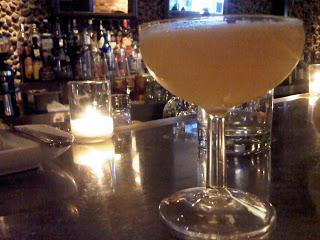 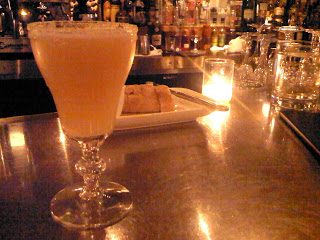 Onward to Woodlot. It would be an understatement to say this place is ‘hip.’ Whether that suits your taste or not, the food is irrefutably tasty and the flavours and pairings endlessly interesting and hearty. The atmosphere is something like a chic log cabin, with an upper floor overlooking the lower, which contains the kitchen and a large, wooden table: meant either for large groups, I suppose, or walk-ins who don’t mind sharing their space. In the kitchen was the eye-catching, wood-burning brick oven. I wasn’t able to capture it in pictures, so check out this blog for better shots of it. Our table was on the upper floor, directly next to the railing, offering a great view while still being nicely displaced from the bustle. Wooden, crate-like wine racks lining the back wall, the casual dress of the wait-staff, and the soft candlelight certainly made this place feel cozy. So much so, that I’d like to go back sometime in the winter, when I suspect this would be a most welcome escape from chilly, city streets.

7 7
Our scallops had a nice smokey flavour from the torch; a great twist that we both enjoyed. My main, the chop of whey-fed pork, was tender and beautifully displayed on a wooden plank, with a side of puréed potatoes with Moroccan olives and parsley. What a combination! F.’s main, which I actually liked better than mine – once again – was a gorgeous whole wheat Papardelle with spring lamb. What wasn’t apparent from the description of the dish, however, was that there was mint in it. F. isn’t a huge fan of mint, or anything flavoured with it, so I think he preferred my dish over his, too. Fine by me: I love mint, so we spent equal amounts of grazing our own and each other’s plates. The picture of the Papardelle really does fill me with regret. It was such a lovely dish! I, for one, would highly recommend it.
Our desserts were a huge hit all round. Though, with our collective sweet tooth, I suppose they always are? The Soma Chocolate pot was downright sumptuous, with rich, creamy textures mixed in with the crunch of hazelnut. F.’s Lemon Tart was as pleasing to the eye as it was to the stomach! A crisp marshmallow topping that, once broken, revealed a flowing, lemony, blueberry center. Big, fat sigh.
This being only the first day in Toronto, I’ll end Part I here!