This month's F&W cover recipe test was wildly anticipated in our household. F.'s eyes went wide the instant he saw the cover, then began peppering me with, "You are going to make this one, right?" "When are we making the cover recipe?" "We should really think about making that cover recipe soon." It's safe to say that those comments encapsulate our initial thoughts on the recipe. Never before has F. expressed such an interest in a cover recipe test, so there was no way I could lose track of time this month! This recipe was going to be experimented with, and ASAP.

Moreover, Jasmine and I have been giddily writing back and forth about this cover ever since it landed on our doorsteps last month, so I suspect it was a huge hit at casa CookThatBook, as well. Don't forget to pop by to read her review, too!

Rating: 5 out of 5. Spicy, Packed with flavour, and that crunch! Perfection.

Just like last month's recipe, I had the fun excuse to go out and buy an ingredient new to me. This month, it was chipotle chile in adobo. In this case, adobo means a sauce or marinade that is used in many Mexican and Southwestern US dishes. They were easy enough to find at the grocery store, I had just never noticed them on the shelf before. (And, truth be told, the only time I'd heard the word in the past was with regard to the popular Filipino dish called Adobo, such as this one here on my friend Elizabeth's blog, The Queen's Notebook. I didn't realize the (perhaps obvious) Spanish connection there!) Seeing as I just needed one chile, I emptied the rest of the can into a mason jar so that I could use these fiery, flavourful chiles to jazz up another dish soon.

The first step was to make a salsa by combining the chile in adobo, cilantro, plum tomatoes, and red onion with red wine vinegar, oil, and salt. The salsa was then set aside in order to make the cheese sauce. (Cheese sauce!) I started by making a roux, then adding half pound of Monterey Jack and a few tablespoons of flavourful pecorino… or, at least, I was supposed to. I would travel to ends of earth (or just to Sardinia again) for good pecorino, but given that I couldn't get to the one store in town I know for sure sells it, I had to come up with a substitute. I had some goat's mozzarella in the fridge, so I figured its pungent taste and not-from-a-cow origins would do the trick. Once the burgers were finished grilling, we were to top it with a smear of the cheese sauce, followed by the salsa, then some pickled jalapeños, then with the blue corn tortilla chips, and all before finally capping it off with the bun. 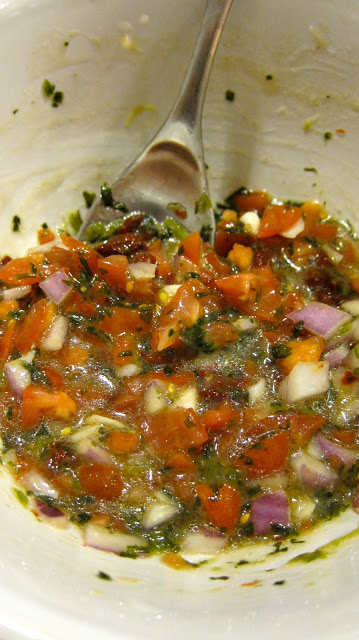 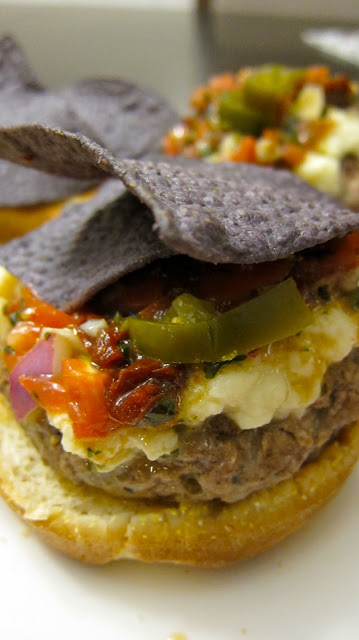 Well, let me tell you something: Mr. Flay knows what he's doing. (As if there was any doubt?)

The lightly seasoned beef was the perfect, succulent base for the party happening on top of it. Between the tangy, spicy salsa, the rich cheese spread, and the crunch of tortilla chip bits mixed in with every bite, all was combined to form harmonious hamburger bliss. I was a little surprised with how little seasoning or how few 'extras' went into the hamburger patties at first, but clearly with a good mixture of quality beef, a little goes a long way. That, and heavily seasoned beef would have just been in competition with that party upstairs. The only problem on our end was that our BBQ had a sudden SNAFU that night, so we had to pull out F.'s college boy George Foreman grill to get the job done. It obviously lacked the smokiness of a properly grilled burger, but it was still ridiculously good.

I thought the tortillas were a particularly genius touch, too. It was as if they replaced the crunch of a crisp piece of iceberg lettuce, only 10 times crispier and with a touch of salt. It also looked fantastic: that pop of colour on top of several other pops of colour made it quite the exciting burger to eat.

Last but certainly not least, we went with the pairing suggestion in the magazine: a bold, berry-rich Zinfandel.

I look forward to trying this recipe again when the BBQ is back up and running! 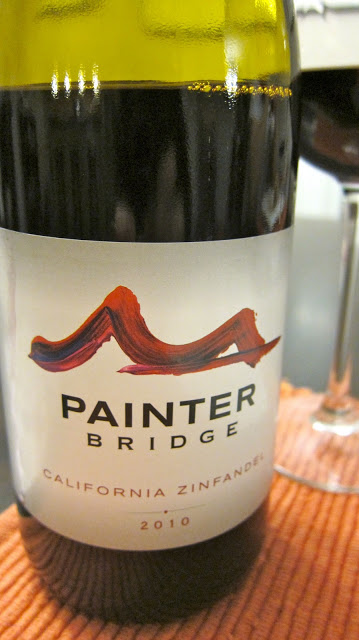 —-
As part of CookThatBook's culinary New Year’s resolutions, we have committed to creating each month’s cover recipe from Food & Wine Magazine.

NOTE: If any of you would like to follow along with us and join in on the fun, we’d love to compare notes! So pick-up a copy of the latest issue of Food & Wine and get cooking.
The mission of Food & Wine Magazine is to find the most exciting places, new experiences, emerging trends and sensations in the culinary and wine industries. From travel and entertaining to luxury and design, this magazine brings an energetic and stylish take on food and wine. For more information on Food & Wine Magazine, please visit www.foodandwine.com