As if I needed another excuse to love and celebrate autumn? I eat and love soup and stew all year round, truth be told, but I love the excuse of colder weather to put soup-making into overdrive.

The theme for October’s Food & Wine is New French Classics, and to exemplify it, the cover features a gorgeous White-Bean-and-Ham Stew. I am once again joining Jasmine of CookThatBook to test this recipe out and share my thoughts and impressions with you.  Don’t forget to stop by her website to see how she fared with this recipe, as well as check out Kendall’s latest wine pairing!

White-Bean-and-Ham StewRating: 4.5 out of 5: Rustic, easy, delicious, and hearty! Just a little extra seasoning, please.THE TEST My initial thoughts? Looks deliciously rustic. I was worried there wasn’t going to be enough flavour, though: What do you mean no onions or garlic?! For a stew with so many classic fridge and pantry staples, I actually had to go out and buy almost every, single ingredient for this recipe. I was under-stocked this week! I hate that. I get some sort of smug satisfaction from knowing I already have the majority of the ingredients at home. Anyone else? In any case, I was glad for Pete’s Frootique, which had every single item I needed. (And, as usual, a little more that I didn’t really need.) Three cheers for one-stop-shopping on an otherwise busy night! 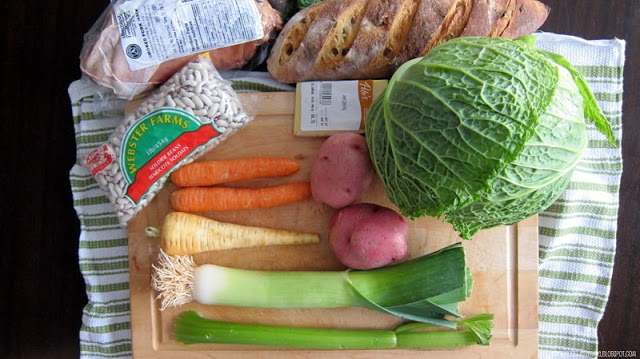 Gathering up all the items and getting ready to prep them, I was awestruck by how beautiful everything was. Such simple root vegetables, leeks, and greens, but so vibrant and lovely. I had a nice mental picture of bowls of this stew laid out on French tables over the centuries, with a big mug of red wine to wash it down. So practical, but so filling and warming. With the grim, grey, and wet day outside, and because I feeling a little under the weather, I knew this stew was going to be the perfect cure. 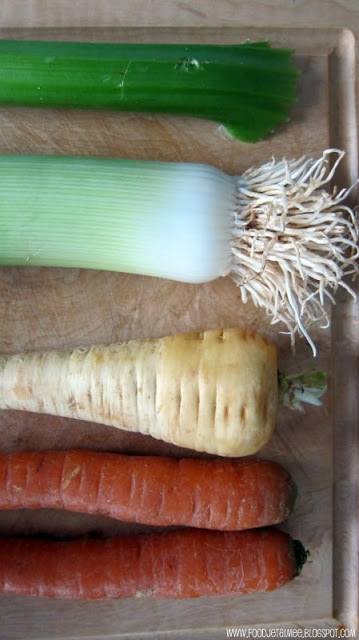 Time consuming, sure, but quite possibly the easiest stew I’ve ever made. It went something like this: Plunk meat, water, beans in a pot. Wait. Chop vegetables. Wait. Plunk them in, too. Add salt. Wait. Take meat out. Put meat back in. Add pepper. Wait.

The stew was then ready to pop briefly under the broiler with a piece of bread and some cheese grated over the top. 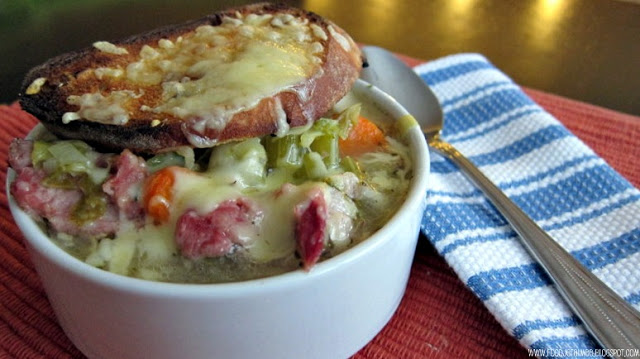 I invited my dad over for a bowl before he drove home after work (over an hour away) and we both agreed that it was pretty delicious. I did find it lacked some seasoning when I tasted it half way through cooking, so I put generous amounts of sea salt and pepper in the broth, as well as a heaping teaspoon of Herbs de Provence, since I didn’t have anything fresh on hand. I know, I know… who am I to question the esteemed Jacques Pépin, author of this recipe? Alas… my tastebuds asked, so I provided.

In spite of the fact that I had to buy 95% of the ingredients, I paid surprisingly little. While I knew what ham hocks were, I had never actually cooked with them, so I wasn’t sure what to expect price-wise. The recipe called for 4 meaty, smoked ham hocks, weighing in at about 3.5 pounds total. Pete’s had one, giant ham hock that weighed in at 3.2 pounds by itself, so I snagged it. It was less than $4.00!

I bought the wrong kind of beans – soldier – but they worked just fine. Pete’s was also out of Gruyère, so I opted for Jarlsberg. (Just because I like it; not as a substitute.) For bread, I found an Apricot & Honey sourdough that added some sweetness to the dish. I paired it all with a fruity Beaujolais, as the Food & Wine article suggested. I opted for Georges DeBeouf’s 2010 Beaujolais-Villages.

I would absolutely make this stew again. It makes 8 portions, and with how easy it is to pull together, it would be great for crowds, especially throughout the fall and winter seasons.

I only know of one creature who won’t appreciate me making this stew again: Ethel. The smoked ham aroma wafting through the house drove the poor thing crazy! She also did a frantic dance when I poured the beans in a measuring cup to weigh them, thinking it was her food pouring into her dish. Poor kitty. A test in patience for her if I ever make this again.
﻿﻿﻿ 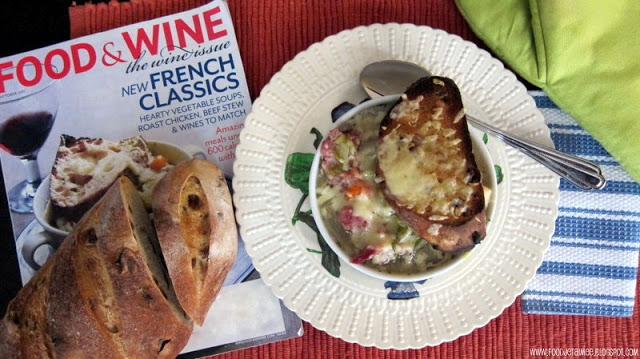 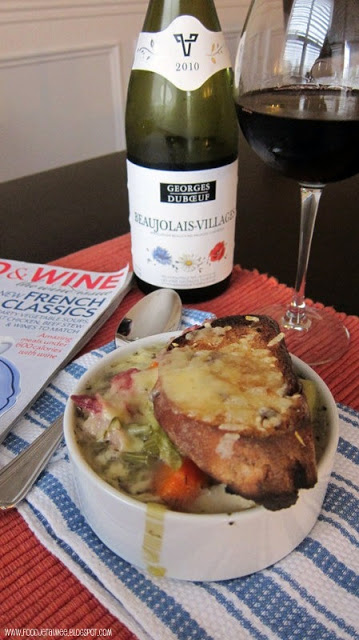 As part of CookThatBook‘s culinary New Year’s resolutions, we have committed to creating each month’s cover recipe from Food & Wine Magazine.

NOTE: If any of you would like to follow along with us and join in on the fun, we’d love to compare notes! So pick-up a copy of the latest issue of Food & Wine and get cooking.

The mission of Food & Wine Magazine is to find the most exciting places, new experiences, emerging trends and sensations in the culinary and wine industries. From travel and entertaining to luxury and design, this magazine brings an energetic and stylish take on food and wine. For more information on Food & Wine Magazine, please visit www.foodandwine.com