As much as HRM is a literary city, it is also a city of filmmakers and film buffs. As evident by the ongoing great success of  The Atlantic Film Festival and by the sheer number of movie goers and theatres throughout our community. Film related titles also remain very popular among our library members.  Here for your consideration are a few titles for the film buffs among us:
Shock Value : how a few eccentric outsiders gave us nightmares, conquered Hollywood, and invented modern horror (M)
by Jason Zinoman

“Between 1968 and 1976, all the films that redefined the horror movie were made: Night of the Living Dead, Rosemary’s Baby, The Exorcist, Dark Star, The Last House on the Left, The Texas Chain Saw Massacre, and Carrie. In fluent reporter’s prose lent urgency by personal fascination, Zinoman tells how their creators made those paradigm-shifters; how they became popular favorites, against long odds for two of them (Living Dead, Dark Star); and something about the subsequent careers of their creators who made further horror films (not all did), paying particular attention to the highly influential Halloween and Alien.” – Booklist
Stranded at the Drive-in : from The Breakfast Club to The Social Network : the 100 best teen movies (M)
by Garry Mulholland

“Everyone undergoes some kind of teenage trauma, and a fundamental way of coping, or rite of passage, is the teen movie. Yet until now there has been no book that explores this successful movie sub-genre with any depth. Step forward Garry Mulholland, who, taking his cue from his previous, hugely acclaimed pop culture list books (This is Uncool and Fear of Music) , seeks to create a pantheon of the very finest teen movies, or in Garry Mulholland’s words: ‘I’ll be doing what film critics have been loathe to do since the 1950s, and taking the entire subculture of teen movies seriously, making a constant and compelling argument that Grease and A Nightmare on Elm Street tell us a great deal more about modern life and human nature than Citizen Kane and The Godfather.’ From Kes to Fame, Badlands to the Breakfast Club, and National Lampoon’s Animal House to Twilight, Garry Mulholland re-evaluates a much maligned genre, and brings it all back again: the good, the bad and the traumatic.” – Publisher 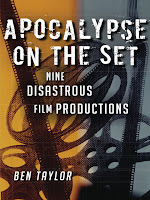 “There is nothing easy about making a film. Each of the films discussed in this book is distinguished by its disastrous production. These films were also chosen for the diverse circumstances of their production troubles, which provide insight into the incalculable combination of problems and dangers that take such a toll on the people involved in the process of filmmaking.” – Publisher
Triumph of The Walking Dead : Robert Kirkman’s zombie epic on page and screen (M)
edited by James Lowder

“The Walking Dead gained national attention as AMC’s latest critically acclaimed drama, shattering the network’s previous premiere ratings highs and earning a second season renewal after its very first episode. But before its television debut, Robert Kirkman’s The Walking Dead was a comic phenomenon. James Lowder, veteran editor and author in the horror genre and comics field, collects some of the biggest names in the zombie genre, along with other top horror and comics writers, to discuss the series on both page and screen. Contents include: what makes The Walking Dead so effective as a zombie narrative; the television show’s surprising optimism; Rick Grimes as Objectivist hero; and The Walking Dead’s journey from comic to television series.” -Publisher