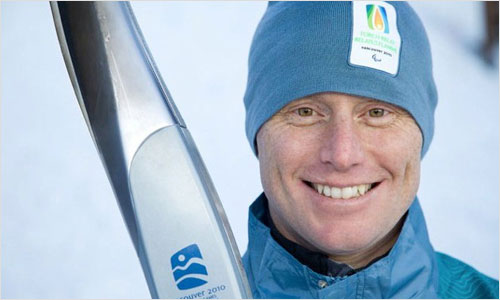 Tyler Mosher, former Bedford resident, ranks 26th in the world in cross country skiing, and is competing in the 2010 Paralympic Games in Vancouver.

Following in his father Brian Mosher’s athletic steps, Tyler grew up in Bedford playing many sports. In fact, he was drafted to play football at four different universities!

Instead, Tyler left Nova Scotia and moved out west to attend the University of British Columbia, where he played on the varsity rugby team.

After university Tyler snowboarded and skied every day. He calls Whistler, British Columbia his home to this day.

Tyler’s father Brian explains the shock of receiving that phone call on that fateful night:

As parents, you can probably relate, when the phone rings at that time it is either ‘drunk’ or something is terribly wrong. In this case it was the latter.

My son Tyler was on the other end of the phone. His first words were that he was calling, so I wouldn’t worry. I automatically began to worry.

In a weak voice, he told me he had broken his back in nine places and crushed his lower lumbar region. The damage was so severe that the surgeon was afraid that he would have to operate through his stomach. The early prognosis was that he would never walk again. 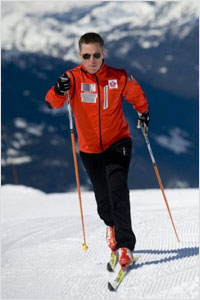 It is this determination and optimism and belief in himself that has brought Tyler to where he is today.

Tyler had been snowboarding at Blackcomb. An innocuous snow drift turned out to be a 30 foot hole in the ground.

Tyler flipped upside down and landed at the bottom of the hole and broke his back in nine different places. He was completely paralyzed from the waist down, and was told he would never walk again.

But Tyler wouldn’t accept that, and didn’t. Today he is 40% paralyzed, and not only can he walk, but he also snowboards and skis with adaptive equipment.

Tyler ranks 26th in the world in cross country skiing, and is competing in the 2010 Paralympic Games in Vancouver.

He is also in a commercial for Petro Canada that is showing during the games.

Proud parents Brian and Dawn Mosher will be attending the paralympic games.

Explains Brina, “ten years later, I will be watching Tyler compete in the 2010 Paralympic Games in Whistler, BC. What he has accomplished is truly a credit to the human spirit. He doesn’t anticipate standing on the Olympic podium, but in my mind he has already won a gold.”