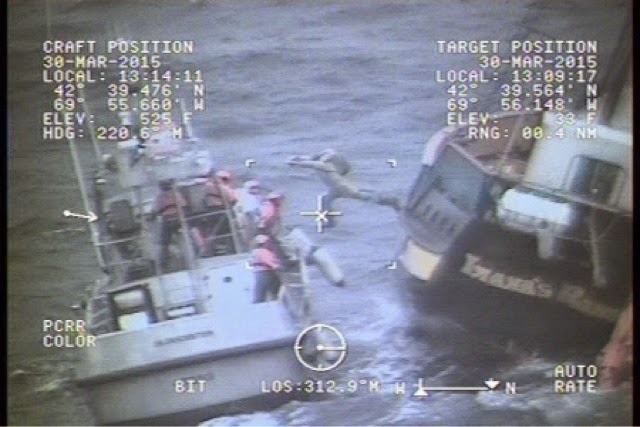 Coast Guard search and rescue crews from Station Gloucester, Air Station Cape Cod and the Coast Guard Cutter Ocracoke rescued nine crewmembers from the Canadian tall ship Liana’s Ransom 58 miles east of Gloucester, Monday.
Watchstanders at the Sector Boston Command Center received notification at 12:35 a.m. that the vessel’s engines were disabled and its sails were wrapped around the mast.
As the weather deteriorated, and seas reached nearly 10 feet, Sector Boston launched two 47-foot motor lifeboat crews from Station Gloucester to tow the vessel back to Gloucester. Once on scene, the boat crews connected the tow, but the rough sea conditions caused the tow line to break.
The motor lifeboats crews directed the crew of Liana’s Ransom to don immersion suits and to prepare to abandon ship about 30 miles east of Gloucester and a Coast Guard MH-60 Jayhawk Helicopter from Air Station Cape Cod was diverted to assist.
The nine passengers were transferred from Liana’s Ransom to the Coast Guard motor lifeboats. One man suffered a head injury when leaping from Liana’s Ransom and was airlifted to Massachusetts General Hospital by the Jayhawk helicopter crew.
The Station Gloucester crews returned to the station with the eight remaining crewmembers. A locator beacon was left on Liana’s Ransom for tracking and the Coast Guard Cutter Ocracoke is en-route to evaluate towing the vessel to port.
“It was fortunate for the crew of the vessel that the owner reached out to us,” said Jay Woodhead, the command duty officer at Sector Boston’s Command Center. He said with winds gusting to 30 knots, it was unsafe for them to stay aboard.
Liana’s Ransom has had a rough few months. In December, she was demasted off cape sable island while attempting to sail to St. Kitts. She is also rumored to have grounded in the sand in Eastern Passage during her last visit to Halifax.