I haven’t reviewed Friday Night Lights in a while, I think because I’m not used to having to download the show every week. (I watched the first four seasons on DVD at an alarming rate this fall.)
I think this week’s episode was my favorite so far this season because we saw some real fallout from Julie’s affair with her married TA. I mean, having his wife show up at her dorm, slap her and scream “Julie Taylor is a slut!!” in front of everyone was humiliating for Julie, but telling her parents the truth was what really broke her. It’s not that I don’t like Julie. It’s just that I (and others, judging from a few Twitter conversations) don’t really love the whole married teacher thing. It seems out of character for Julie, the way it seemed out of character for Rory Gilmore when she selfishly slept with her married ex-boyfriend Dean. Or when George and Izzie hooked up on Grey’s and I know I wasn’t alone in hating that little development. 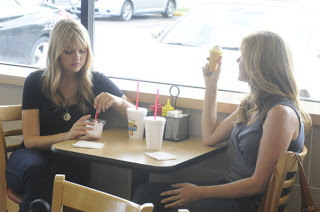 We already dealt with the hot for teacher thing with Julie a few seasons ago when Tami suspected that there was something between Julie and another teacher. Back then, I was on Julie’s side. Nothing had happened between Julie and Teach, and the way Tami acted embarrassed Julie and ruined his reputation. This time? Julie’s older and she knew what she was doing. I feel bad that she was humiliated in front of all her classmates before she had a chance to even make some friends, but my sympathy pretty much ends there.
The rest of the episode this week was also pretty great. I really like how Tami and Eric responded to Julie’s confession – Eric was obviously distraught, and that’s pretty unlike him. The show didn’t make light of Julie’s situation or pretend like she hadn’t made a very bad decision, and I like that. 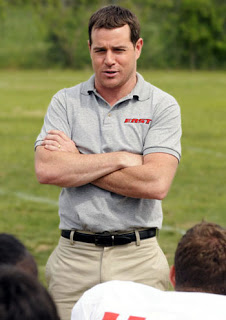 We also got some good Mindy and Billy Riggins moments this week, and I’m really looking forward to getting Tim back on the show. And not just because he’s dreamy, I think the show needs him. I’m a little worried about his storyline. I want him to get out of jail and live happily ever after, but hearing Billy say he’d been making payments on Tim’s land and that it would be waiting there for Tim when he got out made me think that either Tim won’t get out, or he will and the land will have somehow been repossessed. But I hope not. I like how Billy is stepping up in his role as a coach though, and I really like the idea of him taking Luke under his wing. Even if that means getting drunk in the backyard (where there just happens to be a toilet) and making inappropriate phone calls. I haven’t always been a huge Luke fan, but I really want the poor kid to get a scholarship.
This week we saw some great stuff with Vince and his dad, and I have a pretty bad feeling that what Vince’s dad did to protect Vince will come back to haunt them. I want Vince’s dad to walk away from beating the crap out of that drug dealer and eat some pie, but didn’t it seem like even Vince’s dad knew that getting the dealer of Vince’s back would probably bring an end to life on the outside – or worse, at all?
This most recent episode really highlighted some of the difficulties of parenting, which is what it had been lacking in the earlier episodes this season. It seemed like everyone screwed up this week. Vince’s dad will probably get sent back to jail. Mindy, god love her, basically pushed Becky back into bed with the guy who knocked her up last season. And Eric tried to physically force his daughter to go back to college.
Now after two strong episodes, we’ll have to wait until 2011 for the show to come back. A few weeks ago I wasn’t sure I’d be able to say this, but I can’t wait.