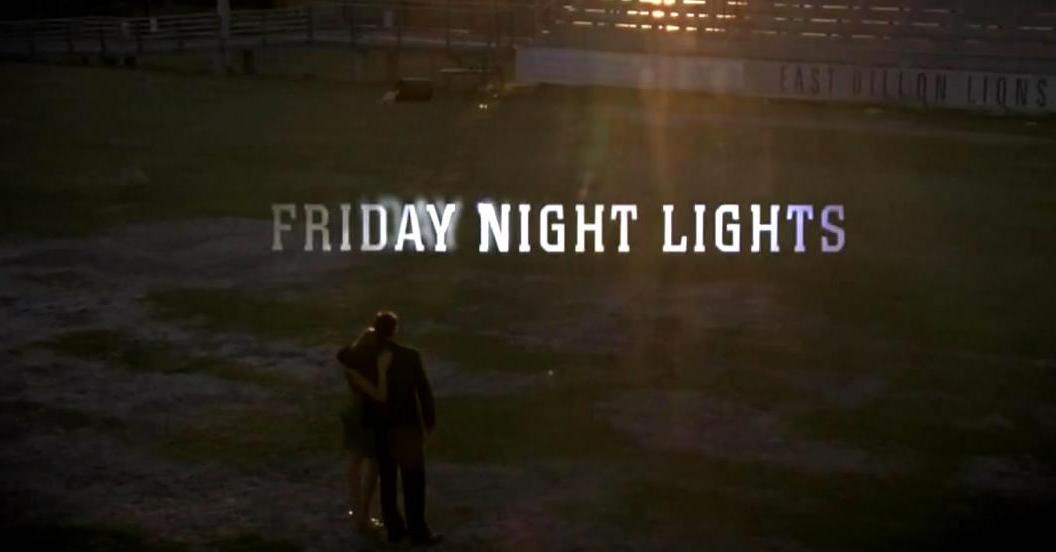 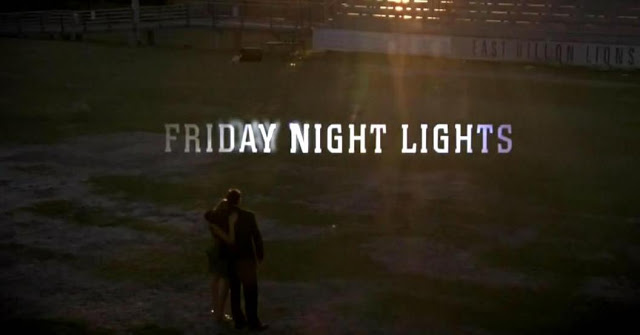 It’s hard to believe that I only started watching Friday Night Lights last fall, because I now feel so emotionally attached to the characters. I was thinking about the series finale all week, wondering what would become of these people and how the writers would wrap things up. I was worried I wouldn’t get closure. I was worried I wouldn’t be satisfied. But I should never have doubted, because this is Friday Night Lights. Of course they did a beautiful job.

I must have had a piece of the granola bar I was eating stuck in my throat or something, because I was choked up the entire time…oh, forget it. I love these characters and everything about the finale brought tears to my eyes. I don’t think words can express how much I loved this finale. I loved everything about it, from the plot and character development, to the dialogue to the way things were shot. It was the perfect ending. 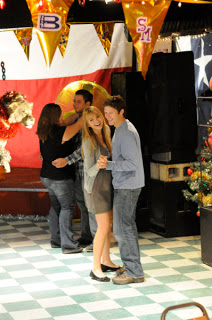 We knew Matt was back in Dillon for Christmas, and I know I wasn’t the only person hoping that he and Julie would end up together. When he proposed with his grandmother’s ring outside the Alamo Freeze, I immediately teared up. I don’t always love young character getting engaged (I was glad Rory chose not to marry Logan near the end of Gilmore Girls) but for Matt and Julie, I think it works. Matt has always been, as he told Coach Taylor, mature for his age. He and Julie have been apart and it didn’t work for them. They’re meant to be together, and their getting married at such a young age feels right.

What I loved about this finale was that as emotional as it was, it was also quite funny. There were many times when I chuckled at a line. And the best part? Matt practicing how to ask Coach for permission to marry Julie with Landry. I wish we’d been able to see more of good ol’ Lance during the episode, but I know they had too much ground to cover to do that. (Although if the show weren’t ending, it would have been nice to see him join Tim and Tyra for a beer at Buddy’s…) 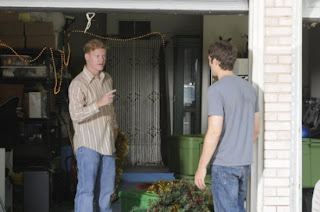 I loved when Landry pointed out to Matt that a few years ago they were trying to figure out how to talk to Julie Taylor, so asking her dad for her hand in marriage was just one more step. Poor Matt, as confident as he’s seemed in his appearances this season, nobody shakes him up like Eric Taylor. He was the polite, nervous, stammering kid he used to be in front of Coach.

Eric’s answer for Matt was no, and Tami wasn’t thrilled either. The way Matt and Julie’s engagement made Coach & Mrs. Coach look at their own marriage was a brilliant way to deal with that storyline. Had I let myself, I would have started sobbing when Julie told her parents that they’re her inspiration. Eric’s speech about marriage was at once moving, because he and Tami have always had such a great relationship, and hypocritical, because in that moment his words were not representative of his actions. He wasn’t communicating with Tami. He wasn’t compromising for Tami. He wasn’t really putting their relationship first.

It broke my heart to hear Tami tell Eric that she was going to turn down the job. It looked like it was breaking Tami’s heart.

This was a good episode for Tim Riggins. He spent a day with little Stevie and pondered whether he should go to Alaska or not, but I think we already knew he wasn’t going to go. It wouldn’t have suited his character. 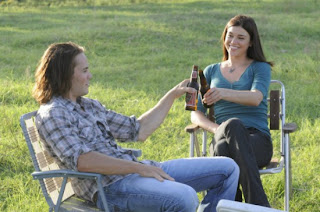 What did surprise me was his conversation with Tyra, about her dreams and his. Do you think in the fictional future of Dillon, Texas that these two end up together? Should they? I was glad the writers threw in a line from Tyra about how she was kicking ass in college, and her conversation with Tim about her goals brought me back to her college essay. She still has dreams, and she’s not giving up on them.

The funniest line of the night was when Tim asked if Tyra meant “like Sarah Palin?” when she said she wanted to go into politics, and she said “Out of all people, really?” Oh, Tyra. You’re the best. Another really funny moment was when Mindy and Billy debated if Tyra and Tim hooking up was incest, or just creepy. It was like the writers read my mind.

Tim has a plan, too. To build a house on his land. To have a job. And to not do anything illegal ever again. And when he told Tyra “Maybe one day our dreams can merge together,” I was sold on the possibility of them being together.

Becky also had some great moments with the Riggins clan. She moved back home with her mom, but we’ve all been reassured that her bond with the Riggins family will never be broken. And it’s a bond they could all really use.

The scene with Julie, Matt and Matt’s grandmother were at once funny, heartwarming, and painfully sad. Even though Julie had delivered an eloquent speech to her parents and being ready to get married, she questioned their decision and Matt pulled her back in. Matt’s grandmother was over the moon and started bringing out her old wedding dress and an insane looking hat, but she also broke my heart because her senility was also wrapped up in that. Julie is a part of their family now, but in a way she always has been. 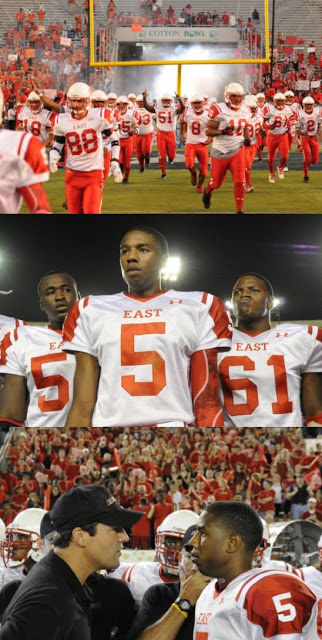 The media were having a field day with the news that a new Panthers super-team was going to be created, but the players and coaches weren’t taking it so well. Eric, for obvious reasons, didn’t want to discuss it at all. Billy and Jess worried about their futures, as were the players who weren’t sure they’d be good enough to make the new team. Plus they had State to think about.

I’m still not sure what to make of Vince and his dad. I don’t think Vince knew he showed up at State, and that shows that Vince is finally in a place where he doesn’t need Ornette, and neither does his mom. But Eric got through to him, so does that signify a breakthrough for Ornette? Their future is unclear.

Buddy and the boosters wanted Eric to sign a five year contract for the super team before he even headed to State, and I honestly wasn’t sure what he would do. Tami had already conceded, and through his discussions with Jess and Vince I was almost leaning toward wanting them to stay. Almost, but not quite. I still felt like the right decision was for them to move to Pennsylvania, and for numerous reasons. Tami was right – it was her turn. She’d been offered a tremendous opportunity, and she deserved to take it. But it also felt like the right time for Eric and Tami to leave Texas. Coach had accomplished a lot there. Vince is going to be OK. Jess is going to be OK. It was time for him to move on. 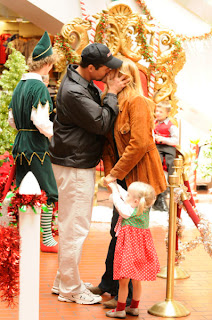 When Eric surprised Tami as she was taking a picture of Gracie Bell with Santa at the mall (most adorable thing ever, by the way) I was elated. It wasn’t just the fact that he told her she could take the job, it was the way he said it. “Will you take me to Philadelphia with you?” It was such a good representation of their marriage. I don’t think Eric decided to go because he felt guilty, or because he was worried Tami would never forgive him. I think he realized that it was truly the best decision for their family.

The championship football game was the best football montage I have ever seen, or ever will see. If the Superbowl was edited like that, I would have watched it. It was emotional, gripping, joyous and terrifying. When Vince threw that final pass and the shot cut to Eric at his new coaching job, I actually gasped. But I can’t think of a better way they could have done it – I’m using this word way too much, but it was perfect.

The Lions won State. Could they have done it any other way? It was like freakin’ Slumdog Millionare. It was destiny, it was written. We saw the ring on Vince’s hand and knew he’d achieved his dreams, and on a new super-team he has a bright future. Buddy was in heaven – riding around in a golf cart, putting up a “Clear eyes, full hearts, can’t lose” sign in the locker room, his son staying in Dillon to play on the team. Billy was there, and we knew that football in Dillon, Texas can go on even without Eric Taylor.

We saw Jess in Dallas, a part of her new school’s football team. I was never the biggest Jess fan, but I love how her story arc wrapped up. She was never really meant to be with Vince, not the way Matt and Julie were meant to be together. She was meant to be with football, and Coach Taylor made that happen for her. Her relationship with Coach Taylor, her respect for him and the game, is where her character really shone. 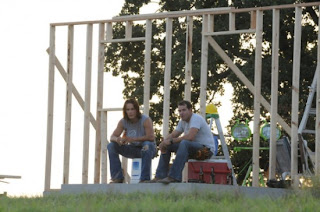 We saw Billy helping Tim to build a new house, but we didn’t see Tyra – her future is wide open. And in a rather surprising conclusion, we saw Becky kiss Luke goodbye as he went off to join the army. I was surprised, but this felt real. Luke wasn’t really sold on the idea of playing football for that small college in Arkansas, but he didn’t want to stay in Dillon either. It seemed like a decision that a kid like Luke would make. Becky’s future was left wide open. Will she end up like Mindy, a wife and mom living in Dillon, or will she follow a path more like Tyra’s and strike out on her own? I’m glad they left it unclear, because I don’t think Becky would know that answer either.

There were a lot of happy endings in the finale, and I’m OK with that. Julie and Matt looked happy too, living as an adorable hipster couple in Chicago. Coach is still a coach, with a new Philadelphia team. He has to teach them to reply “Can’t lose” when he says “Clear eyes, full hearts…” but he seemed in his element. Tami was at Braemore, happier than ever. It’s how things were supposed to end for them.